So if there were 7 players, you could either have:

Which option is best? If it s your first time playing, go for Option 1. If you're competitive, Option 2 (less players per team) will be better.

What happens if I shuffle the cards?

The cards are in a specific order to ensure great gameplay whether you're playing in 2, 3 or 4 teams.

But if they get mixed up it's no big deal - you'll still have fun. If you want to put them back in the original order, they are numbered in the bottom right hand corner of each card.

Card J should be the first card you pick up (placed face down on the top of the pile) and card 130 should be at the bottom of the pile.

Gameplay is simple. Each team takes it in turns to pick up a MONEY MAKER and follow the instructions printed on the card so...

You don't need any more info about the MONEY MAKERS before you start playing - everything you need is on the cards themselves.

Go to WHAT HAPPENS NEXT? at the back of this instructions pamphlet if you're happy to jump straight in.

If you would like more information on the different types of MONEY MAKER cards before you get going, then keep reading.

Some money maker cards move your team round the board

Some money maker cards add an element of Jeopardy

These cards may instruct your team to move forward or back on the board, swap a player with another team or perform a secret task as an individual without being caught by another player.

They're super-simple - just follow the instructions on the card.

Once the first team has completed their MONEY MAKER card challenge, they place that card at the bottom of the pile.

Play then passes clockwise to the next team.

A player from that team now picks up the next MONEY MAKER card and follows the instructions on the card.

Once all teams have taken one turn, play goes back to the first team.

Make sure you take it in turns within your team to be the reader of the MONEY MAKER cards.

Why take it in turns to be the reader? Lots of the MONEY MAKER card challenges involve all team members, but the reader is often the most active player.

Taking it in turns to be the reader means that everyone gets a varied game.

Once any one team reaches the $30 Million Red Carpet, play stops. The space your team has ended on tells you how much each member of that team has earned.

If your team's pawn finishes on the $23 Million space, all players in that team have earned $23 Million each. It's a good idea for each player to write this figure down.

Now nominate one player to read out all of the CREDITS that have been placed on the BANK space during the game.

Each CREDIT has a player's name and an amount written on it. Players should add each amount they are awarded to their total.

If a player's team ended on the $20 Million space and the player was awarded 2 CREDITS as an individual, one worth $3 Million and o nother worth $5 Million, that player would have a total of $28 Million.

The player with the highest total earnings is the winner! 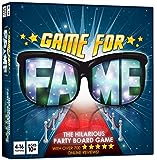 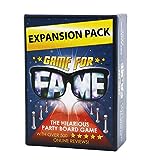