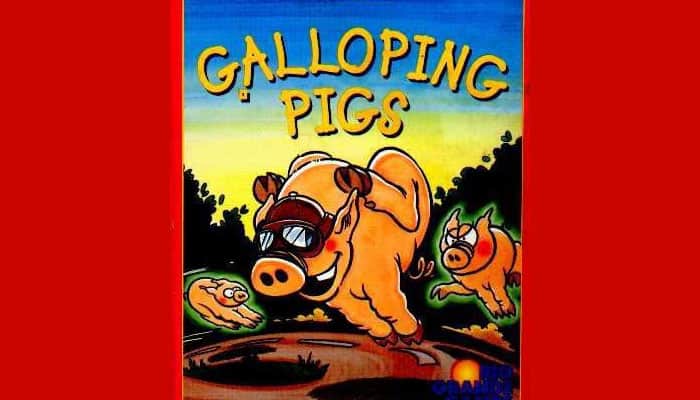 With his race cards, each player tries to create a really great race in which he has collected the most food cards at the end of three racing rounds.

Place the race track cards in an oval on the table. The pigs race on this track; each card on the track is a space. Choose a starting player; we suggest the "piggiest" player.

The starting player places all 5 racing pigs on the track, in any order, facing the clockwise direction (the direction of the race), on 5 consecutive spaces (no empty space between the pigs).

He turns the race track card under the starting pig at right angles to the others to indicate the starting line. Place the food cards face up in the middle of the race track. Although the cards show several different kinds of food, all food counts one point when scoring.

The starting player shuffles the race cards and deals 7 to each player face down. These are the players' hands and are kept secret from the other players. Put the remaining race cards aside for this round.

The starting player begins and the others follow in clockwise order, the same direction that the pigs race around the track. On a player's turn, he plays one card face up in a stack next to the food cards.

He then moves the pig that matches the color of the background of the card played to the next empty space (clockwise) on the track. Once played, the race cards remain in the discard pile for the round.

Note: The pigs do not belong to any specific player. A player plays a card to move the pig of that color.

The pig being moved moves forward one space as the space in front of it is empty.

When one or more spaces in front of the pig being moved are filled with pigs, the pig skips over the filled spaces to the next empty space.

When a player moves a pig so that it is ahead of all other pigs, he takes a food card from the food card stack in the middle of the table and places it face up on the table to his left.

Note: The player first puts the food cards face up on the his left.

A player may win these cards and move them to his right face down on the last turn of the round (see below).

When a player moves a pig so that it is not ahead of all other pigs, he takes no food card.

When all players have played all seven of their cards the round ends. The last race card played by each player in a round is the most important for that player.

If a player moves a pig ahead of all other pigs with his last race card in the round, he takes a food card from the food card stack and takes this card and all other food cards collected this round and moves them to his right, placing them face down.

This is his reward for the round and the cards will count towards victory at the end of the game.

If a player does not move a pig ahead of all others with his last race card of the round, he returns all the face up food cards on his left (those he took in this round) to the food card stack in the middle of the table. He has no reward for this round.

The new starting player places all 5 racing pigs on the track, in any order, facing the clockwise direction (the direction of the race), on 5 consecutive spaces (no empty space between the pigs) starting at the starting line.

Then, the starting player shuffles all the race cards and deals 7 to each player face down.

The game ends after three rounds. The player who has collected the most food cards, face down on his right, wins the game. Note! Luck is as important as cleverness in Galloping Pigs.

The winner is the clever player who is lucky!

At the beginning of a round, each player, starting with the starting player and going clockwise around the table, draws one food card and places it on any empty space on the race track.

Players may not place their food cards in the first four spaces after the starting line.

The player, who first moves a pig to a space with a food card, takes that food card in addition to any food card he may have earned and puts it face up on his left.