The animals have escaped from the farm! You need to bring them back before they get into trouble - and you want to do so faster than your opponents so that you can save more than they can!

Place the six animals on the table in a random circle. Leave some space between animals and place them so that all the players can reach them easily.

Shuffle the cards, then place the deck outside the circle, face down. The last player who cuddled a pet is the Farmer and will play first.

The Farmer draws the top card from the deck and places it face up in the circle of animals so that everyone can see it. If other cards are in the circle from earlier rounds, they must all be visible.

The Farmer rolls both dice in the circle of animals.

Each card that shows at least one die that matches one of the rolled dice is activated and the players must "capture" the animal shown on that card.

If no die matches any visible card, nothing happens.

Each player who correctly captured an animal collects the corresponding card and places it in front of him, face down.

After collecting cards, the players place the animals in a circle once again. If cards remain in the deck, the player to the left of the Farmer becomes the new Farmer and starts a new round of play.

If a player captures the wrong animal, he must draw a card at random from those he claimed in previous rounds and place it face up in the circle of animals.

This card will be in play from the next round on, like any other card. If this player has no cards, then he suffers no penalty for his mistake.

In the next round, the Farmer draws a new card as usual.

The game ends at the end of the round in which the final card of the deck is played. The player who has collected the most cards wins.

If two or more players tie for the most cards, they play one or more additional rounds - leaving cards still in the circle of animals in place and shuffling the claimed cards to form a new deck - until one of these players has collected more cards than each of the other tied players.

(If possible, a player who is not involved in the tie should roll the dice each round). 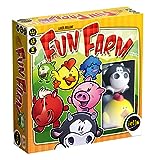