Be the first player to collect 1 of each kind of fruit or 25 total fruit of any kind.

Shuffle all the cards and place the deck facedown. The youngest player goes first.

On your turn, you will cut the deck and choose which card you want to take without looking at the face of the card. You will decide between the top card on the bottom half of the deck or the bottom card of the deck left in your hand.

The catch is that you CAN'T LOOK at the card back for the bottom card of the deck. Take a look at the picture below for an example.

After you choose which to take, look at the card. If the card you choose is either a Fruit Card or a Power Banana card, you can add it to that turn's bounty.

If the card is a bomb, your turn ends and you lose any fruit from that turn!

Sensei wants you to learn not to be greedy!

You can save any Fruit or Power Banana cards by deciding to end your turn before a bomb shows up. These saved Fruit Cards are now yours to keep and go toward the ultimate goal of collecting the right number of kinds of fruit.

For example, on his 1st turn, Luke has successfully cut the deck 3 times and now has the following cards:

He decides to end his turn before a bomb shows up so he now has 8 fruit from his previous turn.

You can't change your mind in the middle of cutting the cards and decide to end your turn to save what you collected!

One other thing: every time you cut the deck you must shout "he-ya".

Note: There are special rules for cutting the cards on your turn. When you cut the cards, you must leave the bottom cards behind!

This means, as you continue on your turn, you'll only continue to cut the cards from the top section of the cards, the ones still in your hand. So, choose wisely: if you cut too thin, your turn will be over quicker!

Sensei wants you to have information on which to base your choice so the CARD BACKS have one of three different colors. Those colors give you a little bit of information about what's likely to be on the card face.

These cards only have one piece of fruit but they also have a low chanc of being a bomb.

These cards have two pieces of fruit but they also have a little higher chance than a green card of being a bomb.

These cards are a veritable farmer's market because they have five pieces of fruit. But, of course, there's also a much higher chance that they are a bomb!

Bombs end your turn and destroy any unsaved fruit. Fruit cards on a bombed turn are returned to the deck and the deck is reshuffled.

If the very first card you choose on your turn is a bomb, you get to ignore it! you don't need to reshuffle in this case. Just put the bomb on the bottom of the deck and keep going on your turn.

There are 3 kinds of Power Banana cards. These cards can only be used after they've gone into your saved stash.

This card allows you, at the beginning of a turn, to take one Fruit Card from another player. This Fruit Card is automatically saved and cannot be destroyed by a bomb.

You may use this card to ignore one bomb on a turn.

If a bomb ends your turn, playing this card allows you to take another turn. However, you must put the fruit that the bomb destroyed back into the deck and reshuffle before you start the turn.

Once you play any Power Banana card, the card is out of the game. It does NOT go back into the deck.

Note: Make sure to keep your saved fruit away from fruit you're still collecting. It's a good idea to keep unsaved fruit in the middle of the playing area to avoid confusion. Sensei hates confusion.

Saved fruit must remain face-up so that other players can see what you have!

You can win In one of two ways.

Note: The Power Banana cards do not count as fruit. Their special Fruit Ninja powers make them impervious to math. 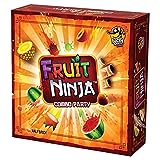