The first player or team to advance his pawn up the game board to the finish space is the winner.

Follow The Letter is designed for up to 4 players or teams. The game can be played with as few as 2 players or as many players as you'd like - divided into teams.

Place the sand timer, die, and card deck within reach of all players. To start, each player or team places his pawn on the START Space on the Game Board.


The Rule of Three

Any time the same last letter occurs 3 times in a row, the next player may have the option of using that letter, OR using the letter just before the repeated letter.

For example: (category: breakfast foods) grits, scrambled eggs, sugar smacks (the next team could choose an answer beginning with "K").

If a player says an answer that doesn't make sense to the other players, they may challenge that player to explain. He has 15 seconds to explain his reasoning.

All players then vote with a thumbs-up or down whether the answer is acceptable. Only a unanimous thumbs-down vote will cause the player to be out. Otherwise, the round continues. 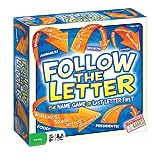