The little kiwis want to leave New Zealand and go on vacation... but they can't fly! Help these flightless birds catch a free ride as they cleverly disguise themselves as kiwi fruit.

Use your catapult and launch your kiwis into the fruit crates to help them find the best perch for their upcoming voyage.

Kiwis like to be in groups of 4, so they can sit with their friends! The first player to group 4 of their kiwis in a square or a straight line wins the game.

You can also win by having your kiwis on the top of each crate at the end of the game.

Each player takes a catapult and 10 kiwis in their color. All at once, players begin launching their kiwis with the catapults (after an agreed upon signal).

Distance from the catapults to the game box is up to the players.

Kiwis that land outside the game box may not be relaunched. Only the topmost kiwi in each compartment is counted.

If a player runs out of kiwis, they must wait until everyone has launched theirs for the round to end.

If a player arranges a group of 4 of their Kiwis in a square or a straight line, they immediately win and shout out, "Flying kiwis!"

If all players run out of Kiwis to launch, and no one has arranged 4 of their kiwis in a square or straight line, then points are scored based on which Kiwis are on top of each compartment.

Players take turns launching their kiwis (one at a time).

If a player misses a shot, they are not allowed to reclaim their kiwi. After each player has launched all 10 of their kiwis, count the kiwis in each square.

Players score 1 point for each square in which they have the most kiwis. Ties score no points. The player with the most points wins. 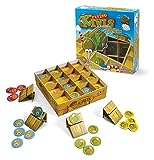