Use the same number of scoring chips as players. Example: If there are 4 players, use chips 1,2, 3 and 4.

Each player takes 6 dice (all of the same color). Write each player's name on the scoring sheet.

) is wild and can represent any number you wish. The winner of a round chooses the next challenge. Each challenge may only be used once per game.

All even: All dice show even numbers.

The game ends after all the challenges on the scoring sheet have been completed. Add up the points. The player with the highest total wins!

This variation is played exactly like the original game except that players choose their own challenge for each new round.

You do not have to say what challenge you're attempting, and you're allowed to change your mind as you're rolling if it seems like you're closer to completing a different challenge. Each challenge may only be used once per player and per game.

Don't forget to shout "Flash!" as soon as you complete your challenge!

Want a faster way to play? This variation is played like the original game except scores are not recorded.

At the end of each round, the last player to collect a chip is out of the game.

Start each new round with one less scoring chip. The winner of the previous round chooses the next challenge.

Continue playing until only one chip remains. The last player standing wins the game! 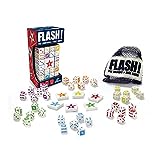