Felicity: The Cat in the Sack Game Rules With their mice, the players attempt to grab the famous cat in the sack. In the sack, there are both good and bad cats. Each player can also put a dog or rabbit into the sack instead of a cat, allowing players to bluff one another. At game end, all positive cats and mice count plus points, but negative cats count minus points.

The following are the game preparation and rules for 4 and 5 players. The modifications for 3 players are at the end of the rules.

Each player takes a set of 10 cards. Each player's left neighbor takes one card from the player and discards it unseen back into the box.

Place the mouse cards in a row in numerical order on the table in easy view and reach of all players. In games with 4 players, return the "3 mice" card to the box. It is not used. Place the "cat in the sack" card to the left of the "2 mice" card.

Now place mice money from the bank on the mouse cards based on the number of the card (e.g. 6 mice on the 6 mouse card).

Return cards for players not playing (5th player in a 4 player game) to the box.

The game runs for 9 rounds. In each round, a group of face down cards (the cats in the sack) are auctioned to the players.

The following is such a layout for 4 players:

After all players have placed one card each, the start player turns over his card (the first card in the row). The start player begins the auction by bidding any amount of mice money (not 0) and placing this amount on the table in his play area (the area before him), or he may pass. Afterwards, the next player must bid more mice or pass.

If the bid comes again to a player who has already bid, he must increase his bid by adding more mice or pass.

Whenever a player passes, he takes back all the mice he has bid so far this round and takes the mice on the lowest valued mouse card still in the row. The passing player cannot bid any more in this round.

Example: the first player passes, takes his bid back and the 2 mice that are on the first mouse card in the row.

Each time a player passes, the players turn over next card of the row, so that the players have more Information to help them decide whether they want to buy what is in the sack or not.

When all the cards are turned over, there is now just one player who has not passed. He pays his bid to the bank and he gets contents of the sack: all cards (with positive and negative values) and puts them face down in his play area. The player places his won cards separately from those in his hand. He also takes the start player marker.

Example: the small dog chases the -5 cat away and the player receives 11 points. With a large dog, the player would receive -5 points, as the dog would chase the 11 cat away.

Note: with more than one dog in the row, the dogs rush about without effect on the cats and are returned to the box. This also occurs if small and large dogs are together in the row.

Finally, the mouse cards are filled again with the appropriate number mice and the second round is begun with the selection of cards and the auction, according to the rules above.

The play ends after the ninth auction, because no one has any cards in their hands left. The last winning bid must still be paid to the bank and the winning player takes the cards from the row as in the other rounds.

Now all players add the points on the cats they won at auction (the yellow numbers are positive and the red numbers are negative). To this, they add the mice money they have left (each mouse is one point). The Rabbits are worth nothing and the dogs are out of the game. The player with the most points is the winner!

At a tie the player with more points in cats is winner.

If a player passes as the last player, he receives 6 mice. This can often be worthwhile as it allows a player to have cash he may want for a later auction. Additionally, these 6 mice are also 6 points.

If a player spends all his money on an auction, he will have to pass immediately on the next and will receive only 2 mice when he does. Thus, this is likely not a good idea. If all players (except one) bid high amounts, that player could win without ever winning an auction.

Use only the 3 and 6 mouse cards. Place the "cat in the sack" card to the left of the 3 mouse card. Put mice worth 21 in the bank; the rest are returned to the box.

At the beginning of the auction, before the start player begin bidding, turn over the top- most card of the fourth set. 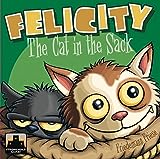 Stronghold Games Felicity The Cat in The Sack