You and your opponents find yourselves wandering the wild, weird world of FANTASTIQA. As you adventure, you encounter strange Creatures. Each Creature you face has both an ability and a vulnerability.

By playing card symbols to which a Creature is vulnerable, you can subdue that Creature and recruit it as an ally, adding its own ability to your expanding deck of cards.

Some subdued Creatures carry Gems, which you can spend to purchase powerful Artifacts or to summon mythical Beasts to your aid. You begin with only a handful of household items, but you will grow in power as you gather allies.

By completing Quests you score points and receive other rewards. The first player to meet or exceed the Quest Goal wins the game!

On your turn do these three things in order:

If either of the two Open Quest spaces on the table are empty, then draw the top Quest card, read it out loud, and place it there, face-up, for all to see. This Quest will be available for all players to complete.

Whenever reading a Quest card, be sure to mention the Region where it must be completed, as marked on the card. (Regions include Forests, Fields, Highlands, Hills, Wetlands, and Frozen Wastelands).

Place a +1 Point Bonus token next to each new Open Quest.

Choose only one of the following Turn Actions:

You may perform only ONE Turn Action per turn. For example, if you Go Adventuring on your turn, you may NOT also Visit a Statue or Complete a Quest.

You may "pass" if you prefer not to perform any Turn Actions on your turn.

You will always start and end your turn on one of six different Region tiles ("Regions" for short). You will use cards from your hand to subdue Creatures that stand in your way as you adventure from Region to Region. These subdued Creatures will be added to your deck and join you in future adventures!

Here are a few more rules that apply when you Go Adventuring...

Once a card is in your hand, you can safely ignore all the symbols at the bottom of the card!

These two matching card symbols can be used together as a single wild symbol to subdue a Creature on the table.

This double-symbol card can be used as a single wild symbol to subdue a Creature on the table.

Place cards at right angles across each card you subdue to keep track of your movements.

B. Turn Action: Visit a Statue

When you visit a Statue, choose only ONE of the following options:


Statue Option: Release up to 3 cards from your hand or discard pile.


Statue Option: Teleport to a Region with a matching Statue.


Here are a few more rules that apply when you Visit a Statue...


When you complete a Quest, do the following:

If you have any Free Actions available that you would like to perform after your Turn Action, play them before proceeding. To end your turn, perform the following actions:


A Few General Rules And Reminders:

The following Free Actions can be performed both before and after your Turn Action (but not during it):

You may perform as many Free Actions as you have resources available to you. These actions may be the same (creating stacking effects) or different. Play multiple Free Actions on your turn to perform powerful combos!


Strategy Tip: Remember that each card you commit to a Quest will remain out of circulation until the Quest is completed! Be careful not to commit cards that you might need to defeat Creatures!

As a rule it is best to wait until you have at least two cards in your deck showing the same symbol before adding one of these to a Quest.


Example of a Free Action: Commit Cards to Quests: The active player has two face-up Quests. On her turn, in addition to performing her regular Turn Action, she also commits cards to Quests as Free Actions.

She commits one Web symbol (the Net), one Tooth symbol (Rabbits), and a double-Flame symbol (Dragon) from her hand.

In an attempt to fulfill Quests in the center of the playing area, the active player also wants to place two of her cards face down beneath her Quest token.

Because she already has five cards there- the maximum allowed at one time-she first Withdraws two of the cards already there and places them in her Discard Pile. She then adds the two new cards, face down.

Free Action: Use a Treasure Token

Spend a Treasure token to perform an special action, instantly. Flip spent tokens over to show that they have been used (one use each). Treasure tokens include:

Cards showing a circular symbol near the upper-left corner have Special Powers. Special Powers allow you to perform a Free Action instead of that card's main ability. As you use each card for a Free Action, place it in your Discard Pile.

Free Action: Use an Artifact Card

If your total score (including penalties) equals or exceeds the Quest Goal, you win the game! Each completed Quest is worth points equal to the number of cups shown on it.

More rarely, the game ends when a player is unable to refill the playing area because the Creature deck has run out. In this case, the player with the highest score wins the game. 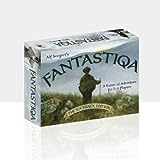