Once again, Newt Scamander's magical beasts have escaped and are running loose in New York City. Players must work together to recapture and return 5 of Newt's beasts to his suitcase before they draw the attention of the non-magical community.

The players will lose the game if they let too many beasts escape or, if any of the players become stunned by a beast.


Each player selects a character and takes the matching Player Board, Set and Ready Tokens, Shields, and 1 Health Slider. Sort the pieces, and place the Health Slider on the side of the player board with the arrow pointing to the 10.

Shuffle the deck of Insight Cards, deal one to each player, and place them to one side of the Beast Cards in the center of the playing space.

Separate the Beast Cards by their difficulty level (indicated on the back), and randomly choose 5:

Place the beasts in a face-up pile in the center of the playing space with the Level 1 Beast on top, with the Level 2 Beast behind it, and the three Level 3 Beasts on the bottom.

Each Beast Card features a unique capture track. All players must work together to move the Beast Marker from its' circular starting space into the suitcase. However, the beast will take actions that can cause it to retreat and eventually escape.

There are two different types of Insight Cards: cards with dice symbols and cards with text (Action Cards).

Beasts are captured through the use of the six dice. On a player's turn, they will roll dice and assign them to their Player Board, and in some cases on their companions' player boards.

A turn consists of four phases:

On their turn, each player will roll the 6 dice up to 3 times.

After each roll the active player may set aside any number of dice, and reroll the others.

A player may change their mind about which dice to set aside after each roll; however, after the 3rd roll they must keep and attempt to use the symbols shown on the dice.

Once the ROLL DICE phase is over, the player must decide which abilities on their Player Board they wish to use, and assign their dice accordingly.

In order to use an action a player must first Ready the action by filling the bottom space for that action, and then Set it by filling the top space with a frame.

To Ready an action a player must assign the indicated set of dice symbols to the bottom space. These dice must all be assigned at one time. Place the matching Ready Token into the bottom space to remind you the action is Ready.

To Set an action, a player must assign one die to the top space, and place the Set Token frame in place as a reminder it has been Set.

To Activate an action, a player must assign a single die with the indicated symbol, to the space created by the Set token. Dice can be placed in the Activate space on either the same turn the Set token was placed or on a future turn.

In addition, once a player has Set an action, that player may assign dice of that type (or a Wild) to other players' boards that also have that action Set.

Sometimes it will be advantageous for the active player to choose to forgo placing a die on their own board.

This is especially true if another player is low on health and could benefit from an extra shield, or if the active player already has three cards.

and Readied his Protect action. On his current turn, he rolls 3 more

to Set his Protect action.

He can then assign the second

to his own Player Board to take the Protect action. Jacob then sees that Queenie has also Readied and Set her Protect action; so, he assigns the last remaining

die to the Protect r action space on Queenie's Player Board.

Once all dice that can be assigned have been, it is time for the players to Activate their dice.

Note: A single action space may not be activated more than once on a player's turn. Therefore, in the previous example, Jacob could not have gained more than one Shield Token for himself on his turn.

Actions can be taken simultaneously in any order, but it is helpful if players return the dice to the pool after taking their actions to remind them not to perform the same action twice.

The exception to this is the Distract action. Each die that is held on a player's board in the Distract space is one less die that the beast can roll. Keep them on your board until after the beast reacts as a reminder.

At the end of each player's turn, they must make one roll for the beast. Each Beast Card shows how many dice to roll and what the effect of each die facing will be.

Example: For the Niftier, you will roll 3 black dice and the teal die.

The beast will then either: Escape-move further away from the suitcase, Attack-lash out and attack the active player's health, or React-this symbol is on the teal die only.

Note: Players can play Insight Cards such as "Roll 2 less black dice for the Beast" or "Ignore a

" to negate some of the effects.

Example: If the NiffIer rolls a

, he will move 2 spaces away from the suitcase on the Capture Track, cause the player who rolled for him to lose one health (or shield), and cause all players that have a shield to lose one. 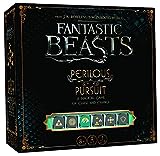