Each player receives a 'Fact' and a 'Crap' Answer card.

All players start the game with 8 tokens and the rest go in a pile in the middle of all the players.

The person who owns the game or the host starts the game as the Reader of the first Question card.

To score in Rush Hour, you win tokens as you go. After the first question is read the nominated player answers and then the Reader says whether it is Fact or Crap. If the player is correct they grab a token from the pile in the middle.

If they are wrong the Reader gets the token instead. The next question is then asked and so on until all questions on the card have been asked or the timer runs out. Remember, you have to be quick- you only have 30 seconds!

If the timer runs out before a question has been read in full or before the nominated player answers, no token is awarded to either player.

There are 7 signs included in the game. Insert a stick through the die-cut slots of the sign so that slightly more than %" of the stick shows above the top slot and approximately 2" of the stick forms a handle below the sign.

If at any time during the game a player loses all of their tokens, (s)he is then out of the game. 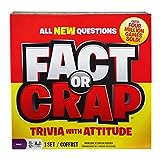 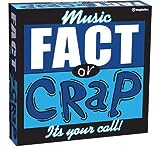