Euchre is a trump game normally played by four people divided into two teams. Partners sit directly across from each other.

Trump is the strongest suit; it could be Clubs, Diamonds, Hearts or Spades. The trump suit is determined during the bidding process.

If, for example, Hearts are trump during a hand, the nine of Hearts (the lowest trump card) beats any Spade, Club or Diamond (excluding "left bower" which is explained below).

After shuffling the cards, the dealer deals them out two or three at a time to all of the players including him- self, starting to his left, until all four players have five cards. There will be four cards remaining undealt.

At this point, the dealer will turn up the top card of the remaining four (called the "upcard") which will become a proposed trump suit.

If the suit of the upcard is declared trump by anyone during the first round of bidding, the dealer must pick up the upcard and discard one face down (the dealer gets the card no matter which team orders it up).

The three cards remaining below the upcard (known as the "kitty") must never be seen by any of the players during the hand.

After the cards are dealt, the player sitting just left of the dealer is the first player to decide whether or not the suit of the upcard becomes trump. The player says "pick it up" to the dealer if he thinks he and his partner can do well with that suit, or says "pass" and the decision goes on to the next player to his left.

As long as the bid is passed, the next player to the left has the same options of picking up or passing. At any time a suit is declared trump, the bidding is over and the play begins.

If the first three players all pass (meaning that none of them want to make the suit of the upcard trump), the dealer has his turn to either pick-up the upcard himself, declaring it trump, or to turn it over and start a second round of bidding.

During the second time around, the players can make any of the three remaining suits trump (not the same suit as the former upcard) or pass again. Once again, when someone declares a suit trump, the bidding is over and the play commences.

The team who declares trump must win the majority (three) tricks to score. The declarer and his partner are considered the "makers". If they are not successful in taking at least three tricks, they are set, or "euchred" and the other team scores instead.

If nobody calls a suit trump, the next player left of dealer becomes the new dealer and shuffles. Some versions of the game include a rule called "stick the dealer" where the dealer must declare a trump suit if nobody else does.

*Rank of the Cards

The non-trump suits rank rather normal; Ace high then King, Queen, Jack, Ten and Nine being the lowest. However, the trump suit is led by the Jack (known as the "Right Bower").

It is rather similar to a high joker used in some versions of "spades". The second highest trump card is the Jack of the same color, black or red (known as the "Left bower"). Much like a low joker.

Example: If hearts are trump, the diagram below would be the rank of the trump suit, highest to lowest (left to right).

Note that the Jack of diamonds becomes trump in this case and must be played exactly like any other trump heart. Diamonds are now short one card. Thus if clubs are trump, the rank is as follows;

When a partnership declares a suit trump, they must win 3 or 4 tricks in order to score one point. If the mak- ers win all five tricks (called a "march" or a "sweep") they score two. If the team that called trump does not win at least 3 tricks, they are said to be "euchred", thus the other team scores two points.

When a player feels that their hand is strong enough to win all of the tricks by themselves, they can call "alone" and play the hand without their partner.

If they successfully win all five tricks, their team scores four points. A lone attempt that wins 3 or 4 tricks scores one point and a lone bid that fails to take at least 3 tricks, it is euchred and the other team scores two.

A player on the opposing team can challenge the player that is going "alone". If that player is euchred, the challenging team receives four points.

The player closest to the left of the dealer always leads first by pitching a card out into the center of the table. The play follows clockwise. Whatever suit is "led" must be "followed" by every player who has one.

In other words, if the first card played is a heart, everyone with a heart in their hand must play one. A player who does not have a card of the suit that is led may play a trump card ("ruffs it") or play any off-suit he wishes ("sloughs").

The trump suit beats all others. The trick is collected by the winning team and the player who won the last trick leads next.

It is important to note that when a player fails to follow the lead suit when he in fact has a card of that suit, he is guilty of "reneging", a penalty of two points are scored for the opposing team.


Beware of the Left Bower

The Left Bower often doesn't register to the beginner as a trump card because it simply doesn't look like one. Quite often a new player will play it incorrectly.

Special attention should be paid to the left bower to avoid costly mistakes. Here are some steps that I believe could help you as a newcomer to euchre; 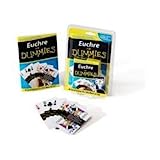