Welcome, Prisoner... Escape the Dark Castle is a casual, cooperative adventure game for 1-4 players, with a focus on atmosphere, player interaction, and fun - perfect for newcomers to tabletop gaming.

It takes 2 minutes to set up, lasts around 30 minutes, and each castle is randomly generated so no two games are ever the same.

The rules are simple. You'll be able to get started within 5 minutes and you can learn as you play.

One word of warning - despite its simple nature this devious game will often defeat you! If you fail, try again - we hope you'll still have fun exploring the castle every time, regardless of the outcome.

Wrongfully incarcerated in the depths of The Dark Castle, you and your fellow prisoners now embark on a desperate quest to escape.

However, the castle is a treacherous place, filled with horrors, traps, and challenges - each of which is represented in the game by a large, beautifully illustrated chapter card.

The object of the game is to overcome every card in the castle deck while keeping everyone in your group alive. If you do this, you all Escape the Dark Castle and win the game together.

However, if anyone dies along the way, the game ends immediately and you must try again!

Place the chapter dice in a pool above the castle deck.

Lay out the character cards and corresponding character dice where all players can see them. The etchings on each character's cell wall show how well-possessed they are of the following traits:

The number beside each symbol shows how many times the symbol appears on that character's unique character dice.

Note: Two sides of each character's dice are doubles, which look like this:

Each player should choose which character they would like to play, place that character card face-up in front of them, and take the corresponding character dice. Tip: A balanced team has the best chance of success.

Each player will need to keep track of their character's health points (HP) using the pads and pencils provided. The starting HP for each character varies according to the number of players in the game:

During the game characters will gain and lose hp but can never exceed their starting HP.

Gameplay involves turning over the chapter cards one by one, and completing the challenges revealed.

There is no turn order. Instead, you must decide as a group which player will turn the next chapter card. But be warned, chapters sometimes contain grisly consequences which only apply to the player that turned the card. Such consequences are indicated with a bolded you.

When turning a chapter card, place it face-up to the left of the castle deck, as though you had turned the page of a book.

Read the italic text aloud to the group to set the scene. Then follow the instructions to complete the chapter.

Tip: Don't skip the italic text. This game is all about atmosphere and storytelling.

The instructions on each chapter card will explain what must be done to complete the chapter. You may be asked to make a choice, roll dice, use items, fight an enemy etc.

When you have completed a chapter, continue turning and completing chapter cards until you Escape the Dark Castle by defeating the Boss and win, or until a character is killed and you lose the game.

When instructed to draw a number of item cards, first draw and place them face-up where all players can see, the decide as a group how the items will be distributed.

Each character can carry a maximum of two items, think of it as one item in each hand. The items a character is carrying should be placed beside their character card.

Some items are described as 'two-handed' which means a character cannot carry any other items at the same time.

Items can be traded between characters, but only after a chapter has been completed, or when new item cards are being drawn. Items can not be traded during the events of a chapter or during combat.

When trading item cards, or choosing which item cards to take from those just drawn, characters can temporarily put down items already in their possession, use items, pass items between characters, or any combination of this.

Unwanted items are left behind and should be placed face-up in a discard pile beside the item deck.

Items can be used at any time unless the item card indicates otherwise. The text on each item card describes what it does. Some items must be discarded when used, but unless instructed to do so you can keep an item for as long as you like.

Tip: When a chapter requires a player to roll a certain result 'in one attempt', that single attempt includes the use of items if the player wishes. For example, you could discard a Liquid Luck potion to re-roll your dice and it will still only count as a single attempt.

This symbol means you should roll a chapter dice for each player in the game and place those dice beneath the chapter card in addition to any others shown. For example, with 4 players you would roll 4 additional chapter dice when you see this symbol.

You are now ready to begin combat.

Combat is fought in rounds. Each round has two simple steps, Attack and Defend.


This ends a round of combat.

Begin the next round by simultaneously rolling to make another attack, and continue fighting rounds of combat until the enemy is defeated or a player is killed

If, after you fully resolve a round of player attacks, all chapter dice have been removed, the enemy is immediately defeated and it does not make a final attack against the players.

When you have defeated an enemy, draw one item card.

Then, choose which player will turn the next chapter card and continue the game.

Some enemies have a special combat ability which is explained on the card. These often break the standard rules of combat in a devious way, making for fearsome opponents. Keep combat specials in mind while fighting.

At the beginning of each combat round, before any dice are rolled, one player can choose to rest - hanging back from the fight to momentarily recuperate.

A resting player does not roll to attack, does not take damage and cannot use items. Instead, that player gains 1hp for each round they rest.

The resting player can re-join combat at the beginning of any round they choose, or can rest for the entire combat if they wish.

Tip: While only one player can rest each round, it is possible for multiple players to rest on different rounds of the same combat by taking it in turns.

Escape the Dark Castle is designed to be as good with 1 player as it is with 4.

To play a solo game, simply choose any two characters and begin the game as normal. You will make all the decisions and dice rolls yourself. There are just two things to note: 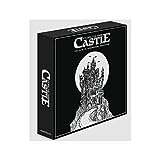 Escape The Dark Castle: Cult of The Death Knight Expansion