There are many different cards in Ecos and every card is unique. Below are some key concepts.

All card effects are resolved from top to bottom.

Many effects will cause you to add a new Map tiles to the landscape. These are shown as a placement effect followed by a Map tile.

Add a Grassland tile to the landscape.

Add a Desert tile to the landscape.

Add a Water tile to the landscape.

If an effect tells you to add a

to the landscape then you take a

and place it on any Land (

) tile that does not already have a mountain. These effects are shown as a

All Land tiles can support up to one

. In your copy of Ecos there are 2 different types of Mountain tokens. In terms of gameplay they function exactly the same way.

to any Map tile that can support a

If an effect tells you to add a

to the landscape then you take a

and place it on any Map tile that can support that

. These effects are shown as a

Also, all Map tiles with a

to any Map tile that can support a

Animals marked with terrain must be placed in on a Map tile whose type matches one of the tabs shown.

Animals marked with a

icon must be placed on a Map tile with the depicted token.


If an effect tells you to add an Animal token to the landscape then you take a token of that animal type and place it on any Map tile that can support that animal AND DOES NOT ALREADY HAVE AN ANIMAL TOKEN ON IT.


All Animal tokens indicate where they can be placed.

Multiple tabs means you must place this animal onto any of the indicated type of Map tiles.

Gorillas don't care about the type of Map tile. Instead they can only be placed on Map tiles that have a

Leopards don't care about the type of Map tile. Instead they can only be placed on Map tiles that have at least one

Running out of Tokens

Many effects let you "Gain" an element. When you use this effect you may place a

of the indicated type just like you would when an Element token is drawn. As always, instead of placing a

you may rotate your Dial token.

Important: A card can never place a

onto itself; i.e. the elements gained by one card allow you to place

However, it is possible to gain elements from one card, allowing you to place

on and resolve the effect of a different card, which then also gains you elements that you use to place one or more

back on the first card.

are removed from a card before using the effect on the card. Thus, the

removed from a card can immediately be placed using any elements you gained from that card effect.

All card effects must be completely resolved before moving on to any other card effect. However, any effect from using the dial is immediate.

Some effects let you "Move" 1 or more Animal tokens. The effect will tell you which animal you can move and how many spaces the animal(s) can move.

When moving an Animal token, the animal may move onto a Map tile containing other animals and may even move onto a type of terrain that does not match it.

In this example while this Rhino can only be initially placed on a Desert map tile, if it is moved, it can move onto a Map tile with one or more other Animal tokens, and can be moved onto Grasslands tiles. It cannot however move onto Water tiles.

Some card effects let you gain a

This works the same as gaining a

from your Dial token; simply take a

, simply move your Score marker up that number of spaces on the Score Board. If you reach 80 or more

, announce it to everyone so that all players know that when the current Harbinger's round is finished the game will come to an end.

Some cards have a red strip. These are cards with effects that can destroy or change parts of the landscape rather than just add to it. When you play an Impact card you should announce to all players that you are playing it and read aloud to the players what it does.

There is no other specific rule with Impact cards, it is just a warning to other players that you have the power to destroy or alter the landscape rather than just adding to it.


Replacing or Removing a Map Tile

, along with any land-only Animal tokens on that Map tile are removed.

are transferred to the new Map tile.

If a Map tile is removed but not replaced then all tokens also on the tile are removed.

Many effects use the word "Adjacent". Adjacent means within 1 space; for example, 2 tokens on the same Map tile are considered adjacent as well as any tokens 1 Map tile away.

Tokens and tiles cannot be adjacent to themselves.

Many effects use the word "Community". A community is a contiguous group of any number of adjacent Animal tokens of the same type.

A single Animal token is considered a community of size one if it is not adjacent to any other Animal tokens of the same type.

The term "this community" always means the community into which you just placed the token, unless specifically stated otherwise.

Many effects use the word "Habitat". A habitat is any number of adjacent

, or adjacent Map tiles of the same type (Water, Grasslands or Desert). A single

or Map tile is considered a habitat of size one if it is not adjacent to any other tokens or Map tiles of the same type.

The term "this habitat" always means the habitat into which you just placed the token, unless specifically stated otherwise.

Some effects use the word "Landmass". A landmass is all Land tiles (

tiles) that are connected in a contiguous group. Water tiles can cause there to be multiple landmasses. Depending on how the landscape is built, there can be landmasses with as few as 1 Land tile, or all the Land tiles on the landscape could be part of the same landmass.

The term "this landmass" always means the landmass into which you just placed the token, unless specifically stated otherwise. 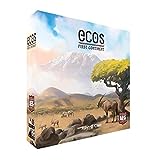