Pick a card color and take those 12 cards.

Look through your cards. The word "dude" appears on each card, along with one of six different characters:

Quickly find matches for as many of your cards as you can.

The Essence of More Dude

At the same time, listen to how the other players are saying the word "dude". Trying to figure out if you have the same character as another player is the essence of more dude.

When you run out of cards, shout "chill". Everyone else immediately stops play. If you have any cards left in your hand, discard them into the center of the table.

Count the number of cards in your score pile. Each card is worth one point.

The player with the most points wins. If there's a tie, all tied players share the win. 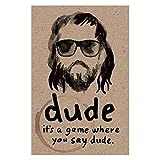 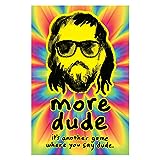