The goal of the game is to drop cards onto the board to build a mix and earn points to reach 21 to win.

The game is played using decks of DropMix cards. Decks can either be the game's pre-built playlists (as indicated by the symbol on the lower right corner of the card, ie. Sweets, Blade, Controller, Highness, or purchasable Playlist packs such as Derby, etc).; using two playlists if playing single-player, or one each if playing 2-player teams, OR a deck can be custom-built, per the following rules:


Note: "Power level" refers to the 3-segment graphic in the top left corner of the card. The card's power level dictates what it can be played on top of during gameplay.

Level 1: 1 point toward deck-building; can be played on empty slots and other level 1 cards.

Level 2: 2 points toward deck-building; can be played on empty slots, level 1 cards, and other level 2 cards.

Level 3: 3 points toward deck-building; can be played on empty slots, level 1 cards, level 2 cards, and other level 3 cards.

Wild cards and FX cards ALWAYS count as 4 points in deck-building, regardless of their shown power level.

To start the mode, each participating player drops at least one card from their deck on the board to check into the game (OR simply tap on the corresponding square on the screen).

Dropping on the yellow/red or red slot will designate that player on the left side of the board (facing the device screen), dropping on the blue or green/blue slot will place them on the right side.

If one card is dropped, the playlist symbol for that song will represent that player.

If multiple are dropped, tap the icon on the screen to select a playlist icon among those included in the stack. You may set an optional turn timer, with the options of 15, 30, or 60 seconds.

If a turn is not made before that timer expires, the turn is forfeited. You may also choose to play to either 15 or 21 points.

When the game starts, a spinner will decide which team goes first. All players then shuffle their individual decks, and draw cards from their decks into a hand. Single-players will draw 5 cards to start, members of two-player teams will each draw 3.

Each turn consists of two moves, one by each player on a team in two-player. A move can be either one of two actions:

Depending on previous moves or cards played, the player may have more or less than the initial draw. Tap the playlist icon on the screen to view how many cards should be in hand at any time during the game.

The maximum number of cards in-hand allowed for single-player is 7, maximum for a member of a two-player team is 5. If the hand is at maximum when the turn ends, no card is drawn.

If a single-player has 6, only 1 is drawn. In the event a game goes long enough that all cards have been played from a player's deck, the player may reshuffle their all discarded cards, including those on the board but covered/not in play, and redraw from that deck.

The opposing player/team follows with their 2 moves. Play continues until one team reaches a score of 21 (or 15 if selected pre-game).

There are multiple ways to score points in DropMix.

Notes: When there are multiple symbols following the action icon, ALL shown elements must be met, e.g. if both Red and Blue symbols are shown, the player must have BOTH red and blue cards in play to qualify.

If an action involves an instrument, Wild cards must be on a slot where the active part of the song is playing the necessary instrument to qualify.

This FX card will allow the player to make an additional move, as specified by the other symbol(s) on the card, after playing it. All typical point bonuses will still apply. In a team game, the additional card may be played by either player on the team.

This FX card will allow the player to draw an additional card or cards from the deck. The card's other symbol(s) will dictate whether the card will be drawn from the top or selected manually by the player.

This FX card will remove point(s) from the opponent or both players, as signified by the card's other symbol(s).

This FX card will clear card(s) from the board, as determined by the card's other symbol(s).

These symbols represent the player (white) and/or the opponent (black), respectively. If both are shown, the card affects both players.

This FX card allows the player to reshuffle and redraw his hand from his currently available deck.

This symbol indicates the FX card will apply to blank slots on the board.

These symbols indicate "same song", e.g. the card will apply to pairs of cards from a single song if both played by the player. 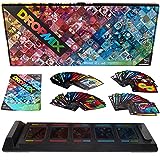