Madness in the lab! Doctor Eureka needs help to complete his experiments. Transfer your materials between the right test tubes, in the right order, and faster than the other players to become the best and brightest scientist!

Each player takes on the role of one of Doctor Eureka s apprentice scientists, and races to be the first to realize the correct combination of plastic balls in the order shown on the current Challenge Card.

In order to achieve this, players must transfer the balls from one tube to the other, without touching them with their hands or letting them fall from the tubes.

The first player to 5 points (5 Challenge Cards) wins the game.

When all players are ready, the top Challenge Card is turned faceup.

All at the same time, players race to complete the challenge by transferring their balls from one tube to another, trying to arrange their balls and tubes in the order shown on the current Challenge Card.

Players must obey the following rules:

Players can swap the position of their tubes so they are in the correct place in line.

If a player touches or drops one of his balls, or incorrectly announces that he has completed the challenge, he is immediately removed from the rest of the round (until the current Challenge Card is completed).

Important: Always complete a Challenge Card with the balls and tubes exactly in the order shown on the card (left to right and top to bottom).

The first player who arranges their tubes in the correct combination calls out, "Eureka!" If all the players agree that he is correct, he scores the current Challenge Card as 1 point.

Players leave their balls where they were at the end of the previous challenge, they are not returned to the starting position. However, all tubes must be returned right side up before beginning a new round.

When all players are ready, a new round begins by drawing the next Challenge Card faceup.

The first player to score 5 points wins the game.

For added challenge, you can play the game keeping all 3 tubes in your hands. You are only allowed to set the tubes down when you complete the Challenge Card and call out "Eureka!"

After the Challenge Card is revealed, players race to call out how many moves it can be completed in. (Players are not allowed to call out the same number as another player).

After each player has called out a number, the player who bid the lowest number scores the card if he can successfully complete the challenge in that many (or fewer) moves. If he cannot, play passes to the next highest bidder.

When playing by yourself there is no need to race or call out a number, simply try to solve the challenge in as few moves as possible. 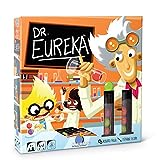