Be the first player to collect 5 pattern cards by creating or spotting the card patterns on the board.

Assemble the board by sliding the vertical playing surface into the base. Place the colored disks in a pile within easy reach of both players. Players should familiarize themselves with the format of the pattern cards to note that the patterns are the same on both sides.

On your turn, roll the die and complete the action as follows:

If you roll a solid color: Drop a disk of the corresponding color in any slot on the vertical board with the color rolled facing you.

If you roll a blue/green split circle: Drop a blue/green disk in any slot on the board with either color (of your choosing) facing you.

If you roll a pink/yellow split circle: Drop a pink/yellow disk in any slot on the board with either color (of your choosing) facing you.

Play your disks strategically as you work to match the pattern on either of the pattern cards facing you.

If your turn results in making the pattern on either (or both) of the pattern cards facing you, point out the match (or matches) to your opponent and take the card (or cards) to score.

Remember that a pattern match counts if it is made with the card in any orientation (rotated in either direction) as shown in the example below.

You don't need to place a disk to make a match. You may discover a match that has gone unnoticed and claim the card at any time during the game.

When a match is made, replace the card with a new card and continue playing. If the pattern on the new card already exists on the board, the first person to spot the match can claim the card.

The first player to earn 5 pattern cards is the winner. If you fill the board before that happens, the person with the most pattern cards at that time wins. To clear the board, simply lift the vertical playing surface and let the disks fall.

You will have to decide when to take a risk and hope the roll of the die is in your favor or that your opponent doesn't see the pattern you are trying to make. 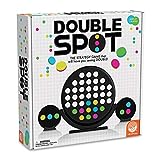