Be the first player to collect a set of six cards - one of each color: one green, one red, one blue, one orange, one purple and one yellow.

Select a dealer. In the card deck, a different "doodle" is pictured on each card.

The dealer begins by turning the deck over 'face up' and selecting six cards - one of each color (one green, one red, one blue, one orange, one purple and one yellow) - placing them face up, side by side, in the center of the playing surface.

These cards are known as the "Gallery". Shuffle the remaining cards thoroughly and place them face down in a pile near the Gallery. This is the draw deck.

The first player begins by drawing one card from the draw deck and adding it to the Gallery, placing it face up anywhere next to the other cards. Next, the player rolls all six dice.

On each turn, before rolling the dice, the player must draw a card to place in the Gallery. If a player rolls the dice BEFORE drawing a card, he/she loses that turn.

Using the figures that landed face up on the dice, the player should begin arranging his/her dice to match a doodle pictured on any one of the cards in the Gallery. (The "dash" figure cannot be turned to be used as an "angle" figure or vice versa).

If the player does not have all the figures necessary to complete a doodle, he/she may roll ANY OR ALL of the dice two more times (for a maximum of three rolls. Three rolls of the dice equals one turn).

If - after one, two or three rolls - the player is able to create a doodle that matches any one of the cards in the Gallery, that player removes that card from the Gallery and places it face up in front of him/her as part of his/her set.

Only one match per turn is allowed. If the player cannot create a doodle after three rolls, his/her turn is over. Play continues in the same manner with the next player. A player must NOT have more than one card of the same color in his/her set at anytime during the game.

On any turn, a player may choose to take a card from any opponent's set. (But remember: You can only have one card of each color in your set). On his/her turn, the player must first declare which card he/she intends to take from another player BEFORE rolling the dice.

The player then draws a card, places it in the Gallery, and rolls the dice. Once the dice are rolled, the player cannot change his/her mind and cannot take any other card. If, after three rolls, the player cannot create a doodle that matches the intended card, his/her turn is over.

Allows the player one extra roll in addition to the usual three rolls. When this card is drawn, it is placed face up next to the player. The player then draws another card, places it in the Gallery, and continues with his/her turn.

The "Free Roll" card can be used once by that player, during his/her turn, at any time during the game.

The "Block A Turn" card is used to cause an opponent to lose a turn. When a player draws this card, he/she places it face up next to him/her. The player then draws another card for the Gallery, and continues with his/her turn.

The "Block A Turn" card can be used once by that player, at anytime during the game, by announcing his/her intention to block a turn of an opponent before that opponent begins his/her turn.

A player is not required to use a "Free Roll" card or "Block a Turn" card on the same turn it was drawn. Once these cards are used, they are turned face down and cannot be used again.

If a player draws more than one of these cards on the same turn, he/she keeps them and continues to draw until a card for the Gallery is drawn.

The first player to have a set of six different colored cards wins the game! 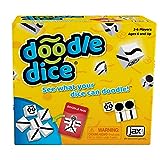