To be the first player to tiptoe from your bed, past all the noisy obstacles, to the refrigerator for a midnight snack - without waking Daddy.

Put Daddy's bed in the middle of the game board, and put his nightcap on his head. Now put him to sleep by pressing him down flat in bed.

Each player selects a different colored mover* and puts it in the matching colored bed at the start of the track.

Note: If you would rather have all girl movers or all boy movers, you may use any of the extra movers provided in the deck of cards.

Use both of the same-colored rectangular cards (so they'll fit into the base snugly) and be sure each player has a different colored mover!

Put any leftover movers aside, out of play.

Remove any extra movers from the card deck and shuffle the remaining 16 picture cards. Deal them face up so each player has the same number of cards.

Note: In a three-player game, put the one extra picture card aside, out of play; because no player has this picture card, everybody will be safe if they land on the space with that picture!

The youngest player goes first, and play passes to the left. On your turn:

Spin the spinner. If you spin:

But if you don't have a card that matches the space, you must push the button on the Alarm Clock the number of times indicated on the space. If you wake Daddy - and make him pop up in bed - you must do two things:


If Daddy sleeps through the alarm, stay on that space until your next turn.

When you're near the end of the track, if you spin a color and there are no more track spaces left of that color, you move onto the rainbow - because it has all the colors in it!

The first player to land on the Rainbow Refrigerator wins. Don't eat too much! 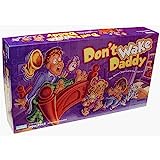