Age: Composed of five Turns for each Player.

Board: Space on the table where Land tiles are placed.

Build: Paying Knowledge points to place a City token or contribute to a Monument.

City: Represented by players' City tokens, Cities can be built on Land tiles.

Cities (adjacent): Adjacent Cities are Cities built on Land tiles that are directly adjacent to one another.

Cities (non-adjacent): Non-adjacent Cities are Cities built on Land tiles which are not directly adjacent to one another.

Civilization Tree: Arrangement of Mastery cards specific to each player.

Corruptio: A black Nodus which cannot be connected to another Mastery card (including other Corruptio).

Cradle of Civilization: Starting tile for the board.

Develop a Mastery: Paying Knowledge points to add a Mastery card to your Civilization tree.

Gain: Obtaining Knowledge points in any other way than through the placement of a Land tile, such as the effect of a Mastery card or Monument.

Game: Composed of three Ages (representing around 3000 years in the life of your Civilization).

Initiative Track: Track on the Cradle of Humanity which determines order of play.

Land tile: Three-sided tiles that are placed by all players during the game.

Locus: The center of a complete circle of six Land tiles.

Monument: A common Objective to which all players can contribute.

Monument card: The main card of a Monument which indicates the conditions of placement, the Monument's effect, and the number of levels available.

Monument Level card: Card representing each level of a Monument as it is built, integrated into a player's Civilization Tree when purchased.

Monument Tile: The tile belonging to each Monument (including the standee), which is placed on the board by the player who purchases the first level.

Produce: The method of obtaining resources through the placement of a Land tile, which includes the activation of Cities. Producing resources can activate Gain effects (cf. Gain).

Reserve: The maximum number of any one type of resource that you can possess at once. Determined by the highest level of City you have on any Camp of that color.

Turn: Action phase of each player.

Upgrade a Mastery card: Paying Knowledge points to improve a previously acquired Mastery card, which is flipped over to its Advanced side.

Vestigium: A colorless Nodus which can be connected to any other color of Nodus. It then counts as a Nodus of that color. May not connect to another Vestigium. 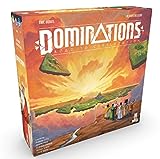