The king tarries in a far-off land. In his absence, the kingdom falls into chaos and disorder. Each duke seeks to build up his own power and influence. Borders will be redrawn, the kingdom divided. Who will control the most valuable regions when the king returns?

Before your first game, you will have to remove all of the pieces from the cardboard frames.

Each player builds castles and encloses them with borders. When a castle is completely enclosed, the castle owner controls that Domaine.

Assemble the board edge as shown. Always place the land tile with the royal city (with the walls and cathedral) In the center of the board. Shuffle the other tiles and place them face up in any order to fill in the board. It does not matter which direction the tiles are facing. Each tile is divided into sixteen territories of various types.

Each player chooses a color and takes all the matching pieces and (he crest token of that color: Each player receives 15 knights and 4 castles (3 castles when playing with four players)

Sort the action cards Into four piles by (the letters on the back. Shuffle each pile separately and then stack them up in alphabetical order with A on the top.

The oldest player begins by placing a castle on any unoccupied meadow space and a knight on an adjacent forest or meadow space. (Spaces touching only at a comer are not adjacent). Castle building continues with the player to the left and continues until each player has placed his 4 castles and 4 knights (3 each if playing in a four-player game).

Note: Castles of the same color must be at least 6 spaces apart (not counting diagonally). The blue castles In this Illustration are spaced correctly.

Where should you place castles?

Your goal is to take control of areas by surrounding your castles with border markers. Once a lone castle has been completely surrounded, it will create a Domaine.

Therefore, it is recommended that you build your first castle in one of the corners of the kingdom. The more forests, villages and mines you can enclose, the more valuable your Domaine will be.

Forests and villages bring victory points, whereas mines yield more ducats. So, you should place your castles as close to these territories as possible. The following example shows a typical situation during game play.

Example: Blue created a Domaine with a village, a forest, and a mine in the right comer using only 6 borders. Orange is still 2 borders short of enclosing a Domaine Red does not control a Domaine.

Two of his castles completely surrounded by borders, but an enclosed region only counts as a Domaine if exactly one castle is inside. Red would therefore have to separate his two castles with borders and create two Domaines.

This example shows a legal starting position. Castles of the same color are at least 6 spaces apart and are on meadows. Knights are on meadows or forests.

The last player to place a castle and knight plays first.

Begin your turn by collecting your ducats if you control any mines. Then you must take one of two actions. You can either:

At the end of your turn refill your hand to 3 cards, either by drawing the top card of the action deck or by taking a card from the Chancery. Play continues clockwise.


Sell an action card to the chancery

Take this action to build up your ducal reserves. To sell an action card, place It face-up In the Chancery row and take a number of ducats equal to the number shown in brackets on the card.

Note: If you sell an action card, you may not choose to draw that card when you refill your hand to 3 cards at the end of your turn. You may choose any other card In the Chancery, or draw from the action deck.

To play an action card, place it face-up on the discard pile beside the action deck and pay (the price on the card (the red number not in (the brackets).

Then take the action Indicated by the symbol on the card. There are 5 different types of actions:

Some cards have two different symbols. When you play one of these cards, you may choose which of those two actions to take. You do not get to take both actions shown on the card.

You can use tills action to place border markers to create Domaines around your castles. When you place a border you should remember that:

Depending on how many borders are depicted on the card, you may place 1,2, or 3 border markers. Take the appropriate number of border markers from the supply. Borders must be placed according to these rules:

The owner of the area totals the victory points and moves his crest token on the scoring track accordingly. Any extra border markers In the Domaine are removed.

Example: Orange places a border to create 2 Domaines A. Orange gains 7 victory points, Blue only one. The two extra borders in the Domaine are removed B.

Depending on how many knights are depicted, you may place one or two knights on the board. You must follow these rules:

Example: Red would like to place a knight. Only the spaces indicated with arrows are legal. The spaces below the castle and knight are not legal because of the borders.

You may expand one of the Domaines you control by one or two spaces by using border markers from the supply. You must follow these rules:

Scoring after an Expansion:

When you expand a Domaine, you may move your crest token up on the scoring track. You get 1 victory point for each forest territory you gained, and 3 points for each village (5 points for the royal city).

If you expanded into another player's Domaine, then he must move his crest token down the scoring track for any territories he lost. Your expansion can also create "neutral zones", regions enclosed by borders but not part of any Domaine, because there are no castles Inside them. Neutral zones can always be taken over by expansion from a neighboring Domaine.

This action allows you to force a knight to change sides! Select any one of your Domaines, and an adjacent one that belongs to an opponent. Both Domaines must have at least one knight in them. A knight then changes sides between those two Domaines. Choose one of your opponent's knights. He must return that knight to his supply.

You may not choose a knight In the middle of a line. The connection between a knight to his castle may never be broken.

Then place one of your own knights in your Domaine. Remember: if you place a knight in a forest, you must pay one extra ducat.

Example: Orange plays Deserter and places a knight. He chooses which knight Blue must remove. He may not remove the knight to the right of the castle since that would isolate a knight.

When you play this action, select one Domaine of your own and an adjacent Domaine of an opponent. Rotate a border marker between these two Domaines 90 degrees. For the rest of the game, neither of these Domaines may expand into one another. Only the two allied Domaines are affected.

Example: Alter the alliance is formed, Orange may not expand into the lower Domaine controlled by Blue. However Orange may still expand into Blue's Domaine on the right since no alliance exists between these two areas.

There are four different kinds of mines in Domaine: gold, silver, copper, and diamond. At the beginning of your turn, you collect one ducat for each different type of mine you control. For example, if you have 2 copper, 3 diamond, and 1 gold mine, you have 3 different types of mines and collect 3 ducats.

If you control 3 or 4 mines of the same type, you have a "monopoly" on that type of mine. A mine monopoly is worth 5 victory points. Move your crest token immediately when you gain your third mine of the same type.

Note: If you lose your monopoly because of an opponent's expansion, you must Immediately decrease your score on the track by 5 spaces.

In this example, Orange has 1 copper, 1 diamond, and 3 silver mines in his Domaines. For the 3 different mine types he collects 3 ducats at the beginning of his turn. The 3 silver mines are worth S victory points. However, if Red (3 knights) should expand into the left Domaine of Orange (2 knights) and take the silver mine indicated by the arrow. Orange must immediately move back 5 spaces on the scoring track.

The game can end in two ways: 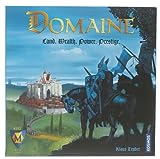