Do De Li Do Game Rules You have to think fast for this speedy card game!

The player whose turn it is places the top card from his hand face up on one of the three discard piles. He now calls out the characteristic which is to be seen most frequently in the center: animal species, color, nought or Dodelido!

It sounds easier than it is, especially since the slow tortoise and the snappy crocodile tend to contribute variety. If you play faultlessly, you win! After all, a mistake is a mistake...

All the cards are shuffled covertly and then dealt equally to the players. Surplus cards are put back into the box. Each player then picks up their cards face down in the form of a pile.

The game is played clockwise. The youngest player begins.

When it is a player's turn, he places the top card of his hand-pile facing up in the middle as fast as he can and - without hesitating - makes a statement. Then it is the next player's turn.

Important: Irrespective of the number of players the cards are always placed on 3 discard piles. These are served alternately in the clockwise direction: 1,2, 3, 1... etc.

If there is a match (i.e. at least 2 cards that show the same characteristic) and a majority, the player calls out the respective animal species or color:

With majority: if both the animal species and the color match, the player calls out the characteristic that is more frequent:

If there is neither a match of animal species, nor color, the player calls out "Nought!"

There is no match for animal species nor for colour. The player calls out "Nought!"

When playing the first card in a new round the rule applies. The player calls out: "Nought!"

Tortoises are particularly slow animals and take longer to think. That is why for every tortoise laid out an "Oh" is put before the statement. This is irrespective of whether the tortoise was already on the table or has just been played:

There is a match of animal species and color. However, there is no majority: tortoise (#2) is equal to blue (#2). The player calls out: Oh, Oh, Dodelido!"

Caution: An "Oh " is not permitted without a tortoise on the table!

If a crocodile is played, all the players must drive the dangerous animal away as fast as possible and bang their hands on the card.

The slowest player, i.e. the one with his hand on top gets all the cards on the table and begins the next round.

Every wrong word, each stutter, each incorrect "Oh" and each hesitation lasting more than 3 seconds counts as a mistake! If a player makes a mistake he must pick up all the cards laid out and put them in his hand pile and start a new round.

The person who has played all the cards from his hand ends the game and wins it! 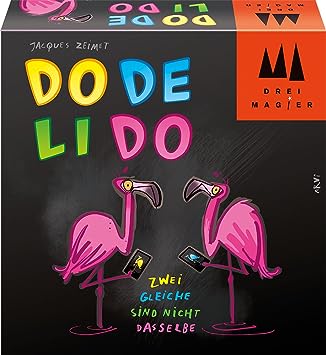