Distract, bluff and out-think your friends in this hilarious memory game!

Be the first player to get rid of your cards.

Note: During a game, if all the Distraction Cards are used, simply shuffle the discarded deck and continue using the other colored questions.


Player 1 reads the number showing on the card in the Number Stack out loud. Play continues clockwise. Player 2 draws his or her top card and places it face-up on the Number Stack so that it completely covers the card underneath it.


If at any time a player draws a Number Card that is orange and says "draw a distraction card", the player that drew the orange card must first draw a card from the Distraction Deck, read it aloud and answer the question or perform the task before reciting the numbers. The Distraction Card is then discarded in a discard pile.

If a player feels that another player has incorrectly recited the numbers in the Number Stack, that player may Challenge. See Challenge Rules.

The player who loses the Challenge collects all the cards from the Number Stack and shuffles them into his or her own stack of Number Cards. This player starts the next round.

Once a player gets rid of all his or her Number Cards, every other player completes one more turn and is given a chance to tie.

If no other players can get rid of their cards, the player without any Number Cards remaining is the winner! If there is a tie, see Tie Breaker Rules.

As our world is increasingly filled with distractions, it can be difficult not to let a simple interruption get in the way of our memory. Just like exercising your body, exercising your mind will make it stronger.

As you play Distraction, you'll find that you can remember longer and longer strings of numbers. You may not be able to eliminate all of the daily distractions, but you certainly can exercise your memory! 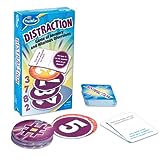