Dish It Up! Game Rules 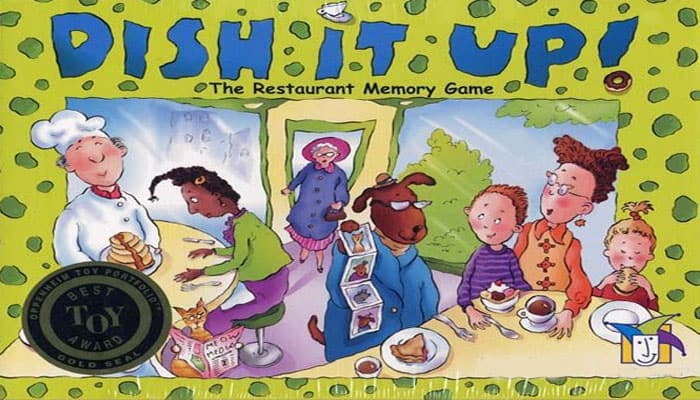 Dish it up at the Blue Spoon Diner! Flap Jack Mac has your orders ready, and your tables are filled with hungry customers. Serve them quickly, and you will cash in on tips.

Can you help the little kid who lost his baseball mitt? Look out for the cranky cus- tomers, too. With the help of lovable cooks, you will stir up and dish out fun.

Collect your tips over rounds of play, and the first player to collect $5 in tips wins.

Place the 40 tiles face-down on the table.

Divide the guest checks among the players as follows:

For a 3 player game, there will be 2 extra guest checks as you start each round of play. Put them in the box, and they will not be used.

Choose one player to pass out Gamewright bucks as tips are earned.

Each player places his or her guest checks face-up in front of him. (In these directions, "he" always means "he or she").

The youngest player has the first turn. Play goes in a clockwise direction.

On each turn, you turn over two tiles and let all players see them. If both tiles match any of the pictures of food or cooks shown on any of your face-up guest checks, a match has been made.

Every time you match both tiles, you get to turn over two more tiles. If you do not match both tiles, turn the two tiles face-down after all other players have had time to see them. It is now the next player's turn.

Matt and His Mitt

If you make a match by turning over Matt and his mitt, keep them, and collect an extra tip. Turn over two more tiles.

If you turn over a cranky customer (you will know one when you see one), your turn ends immediately. You do not get to turn over a second tile if the crank was on the first tile you turned over.

When you have matched tiles to all the foods and cooks on a guest check, you have completed the guest check. Return that guest check and its tiles to the game box. They will not be used again during this round of play.

Each time you complete a guest check, you get one Gamewright buck as your tip.

As soon as one player completes all his guest checks, the round ends. No more tiles are turned over, and no more guest checks are completed. Players keep the tips they earned and get ready for a new round of play.

Scramble all the tiles and place them face-down again on the table. Collect and shuffle all guest checks, and distribute them to the players. If you are playing with three players, put the two leftover checks back in the box. The youngest player has the first turn.

Play continues as described above for as many rounds as needed.

The game ends when the first player collects $5 in tips.

For more challenging play, with 3 players, set the winning tip amount of $6, and for 2 players, use $10.

You can make a simpler, shorter version of the game by using fewer food and cook tiles. Remove the corresponding guest checks. Some players use just one Matt and his mitt, but we think it's more fun to use two. You can also use fewer cranky customers, or remove them entirely.

Divide the guest checks among the players. If there are extra guest checks, put them in the middle of the table to use as community checks. Players earn tips as they make matches, but all players will end the game with an equal number of tips.

On each turn, a player turns over two tiles and lets all the other players see them.

If both tiles match, he does not turn over two more tiles. His turn is over and the player on his left goes next.

The cranky customer does not end a player's turn. If a crank is the first tile turned over, the player may still turn over another tile to try to make a match. The Crank is then returned to the table.

When a player turns over Matt and his mitt, he places them next to his guest checks. The player collects no tip, but may turn over 2 more tiles. If Matt or his mitt are not turned over together, return them to the table. They are not passed around.

The game ends when all tiles are matched to guest checks.