Reach the Finish before any other player.

Next, have each player place the token that matches the color of their pawn in front of them. Select a player to deal first. Remove one Wild card from the deck.

This deck has 4 suits: blue, orange, yellow and green. There are 15 cards of each color. Number cards are ranked according to their value, from 2-12, with 12 being the highest.

When not used to make a DING, the D, i, n and g cards each have a value of 1. There are also 3 Wild cards in the deck.

Players move ahead on the board by taking tricks one by one or by playing a DING.

Players can opt IN or OUT of any hand. Players who participate in a hand must move backwards on the board if they don't win any tricks. However, participating in hands is the only way to move ahead on the board and win the game.

Players who participate in a hand can try to go for a DING, a special move worth 5 tricks that is played before the first trick is played.

The dealer shuffles the deck and deals each player 5 cards. The dealer then places the remaining stack of cards on the table and turns up the card at the top of the stack.

The color of the top card becomes the trump suit. Any upturned card is a community card for the purposes of playing a DING. (If a Wild card is the top card, the dealer turns over a second card to decide trump. The Wild card also remains turned up).

Tip: If only one player opts IN for a hand, that player automatically moves ahead 5 spaces.


Opting In or Out

Players are given the choice to participate or pass on each hand. After looking at their set of 5 cards, each player decides whether they think they can win at least one trick.

Players then declare whether they are IN or not. Each player does this by shielding their token with their hand and privately setting it so that it reads IN or OUT, depending on whether they wish to play that hand.

The dealer then asks players if they are IN or OUT. All players then reveal their tokens to the other players at the same time.

Tip: For a wilder game with even more DINGs, shuffle all 3 Wild cards into the deck at the beginning of the game.

Players who have opted IN try to take tricks one at a time OR take all the tricks at once by going for a DING.

Players who have set their tokens to read OUT sit out. Players whose tokens read IN can try to improve their hands by asking the dealer for up to 3 new cards.

Play moves clockwise; the first active player to left of the dealer is the first player who can ask for replacement cards. A player who is receiving new cards must select which cards they are discarding before looking at their new cards.

New cards are dealt from the top of the remaining stack of cards. Discarded cards are placed at the bottom of that stack. After all active players have had the chance to ask for new cards, the first active player to the left of the dealer plays first by leading a card. From

then on, the player who wins a trick leads the next trick.

A player scores a trick by playing the highest card in a given trick. Players must follow suit if possible.

Cards in the trump suit for a given hand outrank other suits. Wild cards are always the highest-ranking trump card. If a Wild card is led and another player has no other trump except a Wild card, they must play their Wild card.

If no trump or wild card is played, then the highest number played of the suit that was led wins the trick.

game who loses every trick would move 1 space backwards. However, a player who is close to the Finish who

Each trick is worth 1 space each. For example, a player who wins 2 tricks moves their pawn clockwise 2 spaces closer to the Finish.

An active player who does not take a trick in a given hand must move back 1-4 spaces, depending on the position of their pawn on the board. The number marked on each of the board's color zones shows how many spaces a player's pawn must move backwards.

A player just starting the loses every trick would have to move 4 spaces backward.

Tip: If you are at Start and you fail to take a trick, you do not move backwards. You cannot move further back than Start.


Going for a Ding

Each player can also score points by going for a DING. This move is the equivalent of a player winning all 5 tricks in a hand. A player can declare a DING if they collect a D, an i, an n and a g card.

The DING can be spelled out using natural cards or with the help of Wild cards. (A Wild card can stand for any one of the four letters). Players can use the cards they were originally dealt or any cards dealt as replacements.


As well, any card turned up by the dealer to decide trump is a community card. If this card is a D, i, n, g or Wild card, a player can use it in addition to the cards in their hand to build a DING. So, you can build a DING using letter cards and Wild cards that are in your hand or that are community cards.

A player who can build a DING lays down their DING before the first card is played but after the players who are IN have had the chance to ask the dealer for up to 3 new cards.

If 2 players have DINGs, only the first DING played counts. If you have a DING, play it as quickly as you can, in case another player has a DING too! (This is the only time you can play out of order).

The player who declares a DING moves forward 5 spaces on the board. The active players for that hand must each move backwards the maximum number of spaces possible.

The number of spaces to move backwards is based on each pawn's position. The numbers are marked on each color zone.

The first player to reach the Finish wins the game.


Note: If 2 or more players are within 5 spaces of the Finish, moves are awarded trick by trick, with pawns moving at the end of each trick instead of at the end of the hand.

The winner is the player who reaches Finish first. 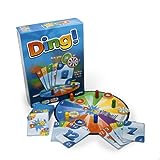