Each player tries to position his spheres as accurately as possible. During each game round, six task cards are revealed. These cards indicate conditions you must follow when placing the spheres - for example, which spheres must not be on top of other spheres or must not touch each other.

If you complete the tasks correctly, you receive points, and if you have the most points at the end of the game, you win.

This is what happens during a game round:

End Of The Round

Put the six task cards from this round aside.

Put the spheres back into the slots in the player trays. The next round starts by revealing six new task cards. A total of six rounds are played.

After six rounds, the players receive point tokens for their bonus tokens - see the following table.

How to convert the number of bonus tokens into points:

In the example pictured above, this is what the players' bottom levels look like:

You can also play Dimension by yourself. Play the game as described above. At the end, add up your points and compare your score with previous solo games. 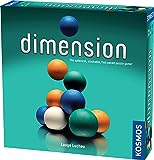