Detective Club" once again opens its doors for new members. You are also invited, but first you must prove yourself as a real detective.

Analyze all the evidence, listen to the witnesses and try to to find out who is lying among your group. Only the most observant and the most cunning will be able to succeed and achieve victory! Welcome to the Club.

A game of Detective Club plays in several rounds. On each round, players will play two cards. The game ends after each player has been Active Player once (with 6-8 players) or twice (with less than 6 players).

On each round, play the following five steps:

The Active Player looks at his cards and comes up with a word, keeping in mind that he will be able to use two cards from his hand to describe that word.

Then, he plays one card face up in the middle of the table: that card is supposed to reflect the word that he has in mind. He then immediately draws a new card from the deck.

Note: Over the course of the game, whenever a player plays an Evidence Card, he immediately draws a new card to replace it. Each player must always have 6 Evidence Cards in hand.

Example: Mike is the Active Player. He wants to play with the word "nature". He places the card displaying a red rose to reflect that word.

The Active Player writes the word on each notebook except one. Then, he shuffles all notebooks and randomly gives one notebook to each other player.

Note: Players must keep their notebook secret at all times! No one knows who is the Conspirator... except himself.

Starting with the player that sits on the left of the Active Player and proceeding clockwise, each player plays one card from his hand. Again, that card is supposed to match the word that the Active Player wrote on the notebook.

Example: Bill is a Detective. He can see that Mike wrote "nature" in his notebook, so he plays a card that displays the sea. That should be enough.

Example: Jane is the Conspirator. There is nothing on her notebook. She tries to analyze the two previous cards and looks for something that could fit in. There is water on both cards - maybe the word is "water "? She chooses a card with a big blue wave.

Once all players have played a card, the Active Player plays a second card, and so on until everyone played two cards.

Example: Mike and Bill have now added a second card, and Jane understands that the word was probably not water. Maybe "nature " then? Or something similar? She places the sunflower card, hoping for the best.

While the Active Player plays cards on the middle of the table, all other players play their cards in front of them.

After all players have played two cards, the Active Player says the word that he has written. He then explains the reasons why he chose the two cards that he placed to reflect that word.

All other players do the same, proceeding clockwise. Once all players have explained their choices, players may vote to designate who they think is the Conspirator. The Active Player does not participate.

Starting from the player on his left and proceeding clockwise, each player places his Voting Token next to the Player Marker of his choice, except his own.

Example: Bill and Dustin think that Jane is the Conspirator because she was unable to explain her cards clearly. Bill places her Voting Token next to Jane's Player Marker. She in return, votes against Bill, hoping that Dustin will make a wrong choice.

Once every player has voted, reveal all notebooks and proceed to scoring.


Example: Bill and Dustin were right and score 3 VP each. Jane and Mike do not score any VP for this round.

Players keep their VP Tokens face down. Once the Scoring Phase is complete, a new round begins: the Active Player passes his marker to the player that sits on his left.

That player becomes the new Active Player and takes the notebooks. Make sure to cross out the previous word on all notebooks to avoid confusion!

The game ends after each player has been Active Player once (with 6-8 players) or twice (with less than 6 players). Reveal your VP Tokens and add them up to get your final score.

The player with the highest amount of VP wins.

If there is a tie, tied player with greater amount of victory point tokens wins, if still tied, all tied players share victory.

Before the first round, players choose a topic. When the active player chooses a word on his turn he must make sure that this word matches the topic that was decided at the beginning of the game.

Topics can be very specific (for instance Space Opera , USA", "Protagonists"..). or general ("Movies", "Countries", "Literature" ) depending on the level of difficulty you want to play with.

Make sure than everyone agrees on the chosen topic. You can switch topic after a few rounds if you like, or try to play the whole game with the same topic!

To shift focus of the game, you can switch the Discuss part of Step 4 "Discuss & Vote". In that case, start voting immediately after each player has played two cards.

The Active player does not say the . word out loud and players do not explain their cards. 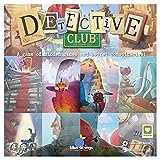