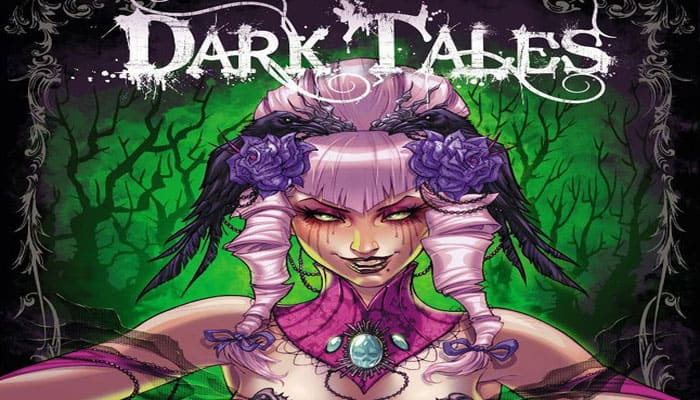 Once upon a time, there was a happy ending: ".. and so, the valiant prince slew the evil dragon and saved the beautiful princess!"

But in the Land of Dark Tales, it's not always that way, and not everyone lives happily ever after. In the deep woods, you can meet disturbing creatures that reject the light, ready to deceive with enchanted items and powerful curses.

Choose your companions and servants with care, and use their intriguing abilities at the right moment, and live the plot of your own Dark Tales!

Separate the Setting cards from the Playing cards. Shuffle Setting cards A and B separately, then draw one random card from each set. Place those two cards face up in the middle of the table, visible to all players, and remove the others from the game.

The A card shows which Items may be used during the game, and what their effects will be. The B card shows which items are worth victory points at the end of the game (see "The Setting Cards" for more).

Put the Items (the tiles) face up in piles, separated by type. Keep the victory point tokens in a pile within easy reach. The number of items in the game is intended as a limit: you can't take an item if it is not available in the supply.

Victory points are not limited: in the unlikely event that they run out, use any suitable substitute.

The owner of the game chooses a starting player (or choose at random). The game is played in turns, in clockwise order. On your turn, you must play through the following phases, in order:

Draw the top card from the deck and add it to your hand. If the deck runs out, do not draw: see "The End of the Game".

During this phase, you may play one Item that you hold by returning it to the supply. Then, apply the effect(s) listed on the A Setting card.

Important: This phase occurs before Phase 3: Play One Card, so you cannot play any item you gain this turn thanks to a card you play.

Example: "The Battle of the Forgotten Moors" Setting card is in play and you have a Sword in front of you.

You may play it (by returning it to the supply) to discard any Villain from play (in front of you, in the common area, or in front of another player) to score 3 victory points. Note that if there are no Villains in play, you cannot play the Sword.

In this phase, you must choose one card from your hand and play it. Follow the instructions and the icons on the card to determine how many victory points it is worth, where the card goes (the discard pile, the common area, or in front of you), and any effects it has.

Every card can be played in any situation, but you must follow as much of the card text as possible.

Example: The text of the "Dragon" card reads: "Discard 1 Place and 1 Male from play. Score 2 VP for each card discarded". You may play the "Dragon" even if there are no Places or Males in play and score 0 points.

Keep any Items you gain face up in front of you.

Keep any victory point tokens you gain face down in a pile in front of you. You can always make change if needed from the central pile: for example you can trade five 1-point tokens for one 5-point token.

After you play your card, your turn ends. The player to your left takes the next turn.

Example: You play a "Wizard", placing it in the middle of the table, which requires you to reveal the top card of the deck: it's an "Enchantment", which you can immediately play by putting it in the discard pile to take 1 Item from the supply.

You choose a Magic Wand (you will be able to play this Item starting on your next turn).

You also score a total of 3 victory points from the supply: 2 for the "Wizard" and 1 for the "Enchantment", adding them to your face down pile. Your turn ends.

The Golden Rule: whenever a card contradicts the rules, the card always takes precedence!


A. The Playing cards

Name: The complete name of the card: Some card effects refer to the names of cards.

Illustration: An artistic representation of the card. It does not have any effect on play.

Summary Bar: A summary of what the card does and how many victory points it is worth. This summary might not be complete: it is just a reminder of how the card behaves. It is not necessary to learn the icons you find here for now. You must always refer to the text box. When you play the card, take the stated number of victory points (as tokens) and keep them face down in front of you.

What: This icon specifies the Type of the card. Some cards effects refer to the types of cards:

Where: This icon shows where the card goes when played:

Set and Card Quantity: This is a code made of one or more letters (or a symbol), and a number:

Letter(s): "B" is for "Base Set" (in the expansions you will find a different letter): this will be handy when you have to sort the cards out.

Number: States how many cards of that type are in the deck.

Notes on the Cards:

Dragon / Ogre / Princess: You may take cards from the common area, or in front of you or another player.

Dark Lord: It is not considered "in play" when you score points.

Gypsy: You must show your cards also. Once the effect has been carried out, each player takes back his cards in his hand. You always score 1 VP, to which you add 1 VP for each revealed Place (so, if 3 Places are revealed, you score a total of 4 VP).

Witch: You may no longer draw cards. But, some cards have a different wording (Princess, Secret Helper, etc. say "take a card from play" or "look and add to your hand"), so those effects still apply even if you have the Witch in play.


B. The Setting Cards

"A" Setting cards take effect during the game:

"B" Setting cards take effect at the game's end:

The combination of cards A and B generate the title of the Dark Tale you are playing: just read both parts together, linked with an "and". For example, if you play A3 and B2, the title would be "The Test of the Knights and the Dragon's Treasure".


Important: You may only count and/or discard items you possess unless otherwise specified.

For example, "one Villain" would mean a Villain you possess (have in front of you), but "any one Villain in play" means one of yours, in the common area, or in front of any other player (but not in the discard pile or your hand!).

When the deck runs out, no one draws any more cards. Keep playing until one of the players, at the beginning of his turn, has no cards left in hand. At that point, the game ends (that player does not take his turn).

Then, apply the effects listed on the B Setting card. Finally, all players reveal their victory point tokens: the player with the highest score is the winner!

If there is a tie, the tied player with the highest sum of Items and cards in hand wins. If they're still tied, the victory is shared.

Thanks to the pair of Sword + Creature, you score 3 points (the other Sword and the Magic Wand are worth zero points). With 3 Gold Coins + 2 hand cards = 5 you rank second (the first player has 6) and score 5 more points.