Players should decide how many rounds they want to play.

Spread out in a dance circle on the floor; divide the tokens between all players. Decide who will be the first player to dance and who will be the DJ. After that play moves to the left.

Note: Each section of music that's on the CD is timed to 40 seconds. You can use your own music, too, as long as you time it.

You can write your own dance charades on the blank cards that are included in the game and mix them into the deck.

On your turn, draw a card. The DJ will then start the music. You will only have 40 seconds to dance what is on the card and earn points.

You are not allowed to speak or spell out what is on the cards in any way.

The other players will try to guess what you are dancing. If someone does guess correctly in time, draw another card and keep dancing! You will earn one point for each correct guess you are able get in time.

But you could also earn points just from dancing! If another player just really likes your moves, they can toss up to three tokens into the dance circle during your turn.

At the end of each turn, add up your total points and write that number on the score card. Any tokens that were given for good dancing are put out of play for the rest of the game.

After you have played the agreed upon rounds add up your total points. The player with the highest total wins. 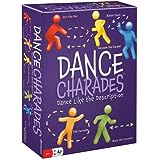 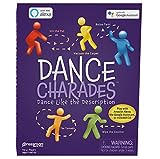