Curses! is a card game of wacky rules that people give each other. Anyone who makes enough slip-ups is out of the game and the last one remaining is the winner.

The goal is to be the last one remaining when all your opponents have each broken three of their curses.

Shuffle the two card stacks separately, the Curse Cards in one pile, the Challenge Cards in another. Put them where everyone can reach them. The player with the closest upcoming birthday goes first. The order of turns goes clockwise around the circle.


A typical Curse might read "You are a chicken. Each time you speak, say 'bock bock!' like a chicken clucking". They are now stuck with that Curse for the whole game unless someone catches them breaking it.

Any time a player fails to do what a Curse says, he has broken that Curse.

Whenever a player breaks a Curse (by forgetting to say "bock bock" for example) any of the other players can catch him by ringing the bell and saying "Curse-Breaker" or some such.

When this happens and everyone else generally agrees the Curse was broken, the player turns the broken Curse Card face down in front of him. When a player gets three of these face-down Curses he is out of the game.

When a player is out of the game, his remaining Curses stay behind. It's up to him to distribute them among the other players as he leaves. There is no limit to the number of Curses a player can have.

People who are knocked out of the game still count as players in terms of standing up, touching people, and so forth (this will make more sense after you've played).

What if it's impossible to do two Curses at once?

You are out of luck. For example, if you get stuck with "Keep your wrists touching your chest at all times". and "You can't bend your elbows". you will just have to break one of them.

If you can successfully pull off an Irish and French accent at the same time, though, go for it.


What if someone fails a Challenge Card?

As long as they tried, they get credit. If they can't think of a nursery rhyme for example, they can make one up.


At what point do I have to start doing what a Curse says?

If someone insists on getting technical, the Curse goes into effect at the end of the current player's turn. But anyone who gets technical with this kind of game is taking it a little too seriously.

Purists don't allow any exceptions during the game to answer the phone, get a drink, and so forth. 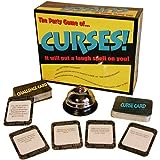