Get ready to serve up a hot cup of bluff! Each turn, you will roll the dice and call out a number.

You can call out the true value of your dice, or you can bluff about it and make up a new value.

If you trick your opponent, you will score a chip as your reward. But watch out - if they see the real truth, they will take the chip instead.

Place the 16 chips in the middle of the table in ascending order, as shown:

The youngest player takes the first turn as the bluffer, and play passes in a clockwise direction.

On your turn, you will roll the dice, pick a target, and call out a number. Then, depending on your target's response, one of you will score a chip.

Roll the three dice inside the cup, then secretly look at their total value.

You can pick any opponent as your target (and you can pick a new target on your next turn). However, if you want to go after a chip that's already scored by another player, then you MUST pick that player as your target.


Call out a number

You can call out the true value of your dice, or you can bluff about it (and say whatever number you like). Just make sure the number you call out is on a chip you want (and not on one you have previously scored).

Whatever number you call out, your goal is to trick your target:

Your target responds by saying "truth" (if he believes you're telling the truth) or "bluff" (if he thinks you're bluffing).

Lift up your cup to reveal the value of your dice, then announce whether you were bluffing or telling the truth.

Exception: If the chip you called was in front of your target at the start of the turn, then you must give him any one of the chips you have previously scored.

If you roll doubles, then you may choose to trade in two (or more) of your chips instead of calling out a number this turn.

To do so, lift up your cup to show your doubles, then return two (or more) chips back to the middle of the table, and exchange them for a single new chip worth the same number of points as the combined value of the chips you returned.

Then pass the turn to the next player.

The game ends when the last chip is taken from the center of the table. The player with the most points wins the game.

Tie goes to the player with the fewest chips.

Alternatively, you can choose to play to an agreed upon number of points. 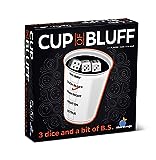