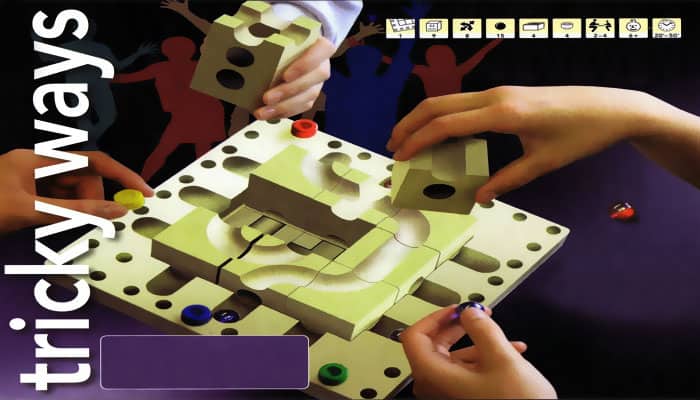 By rearranging cuboro elements, players create paths as long as possible for leading marbles into an empty finish field. The more track elements are used the more points are collected.

(from age 6 and as an introduction!)

As for this version, paths are arranged on the surface of the cubes (channels).

Place the 8 cuboro cubes on the board according to the basic grid "Starting position 1" - pay attention to the align- ment of the channels.

The starting tower remains outside! For each player, place a game peg in the starting field.

As for four players each receives 3 marbles: 2 blue and 1 red (joker). In case of less players split marbles equally (each receives same number/colors).

The oldest player starts. The cuboro cubes in the starting positions can be rearranged using a maximum of three types of changing.

The goal is to create as long a path as possible from the empty field (reserved for the starting tower) to one of the finish fields.

Only three types of changing are allowed:


The same type of changing can be used three times or then a mixture of the options. Attention! Move only one cube at a time. It is not allowed to re- move additional cubes from the game field or move two cubes at the same time.

Now the starting tower comes into use and a marble is sent on its way (stopping of the marble because of not enough speed does not count as failure).

Each player may at one time make a fourth, additional change (red Joker marble). It is allowed to use the Joker during an arbitrary move without advance notice.

Each of the used functions starting tower + channel(s) on the cuboro cubes accords to one point, thus means one field forward on the points' course.

The starting tower is removed and it's the next players turn. Again, as long a path as possible is to be created ending at another finish field.

Finish fields occupied by a marble cannot be used again.

The game ends when all finish fields are occupied with a marble. Winner is the player who has come the furthest on the points' course.

If two game pegs reach the same point field, they are placed on top of each other. Level-on-points ranks are possible at the end of the game.

As for this version, paths are arranged on the surface and the inside of the cu- boro elements (channels and tunnels).

Place the 8 cuboro cubes on the board according to the basic grid "Starting position 2" - pay attention to the alignment of the channels and tunnels.

The starting tower remains outside!

The game play is the same as in game version 1. Here, rotating the cube also includes "turning it upside down".

It is allowed to lift the cubes in order to know the direction of the tunnels.

The level-changing element 11T counts for a tunnel function (2 points).


Experience and creativity are required to tap the cuboro-Systems' full potential.

The more it is played with the more original and amazing track courses are discovered. Including the tunnel functions poses a challenge even to those loving riddles and tough strategists!