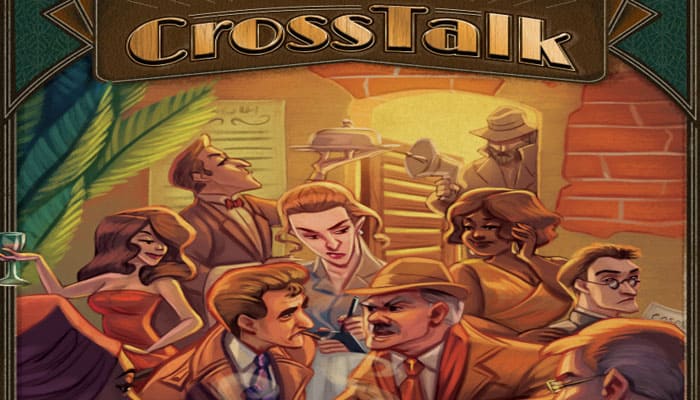 CrossTalk is the Party Game of Subtle Conversation, where two teams race to guess secret Keywords. Each round, teams select a clue-giver, and those clue-givers are given knowledge of the same secret Keyword.

The goal of the clue-givers is to help their teammates guess this Keyword before the other team. The round begins with both clue-givers writing a one-word clue to give their team in private. Then, clue-givers will alternate providing one-word public clues to everyone. But, there is a catch!

Clue-givers will need to use their private clue to provide context for the future. This will allow them to slip public clues by the other team.

The round ends when one team correctly guesses the Keyword or both teams run out of guesses. Each correct guess, is worth 1 point, and the first team to earn 5 points wins.

Note: Clue-givers are not allowed to share any information about their Keyword outside of legal clues.

Once the Keyword is decided, the rest of the round consists of private clues, public clues, and guesses.

Each team gets 1 private clue and a maximum of 4 public clues and 5 guesses during a round.

Both clue-givers start by secretly writing down a one-word private clue on the Private Clue Board and passing it face-down to their teammates.

All teammates should see the private clue from their team's clue-giver. This private clue should not be shared with the other team.

The clue-givers will then alternate giving public clues. The clue-giver from the team that did not score last round will decide which clue-giver will give the first public clue. For the first round and any round following a scoreless round, randomly decide the clue-giving order by rolling the die.

After a clue-giver has decided on a public clue to give, the clue-giver should write it down on the Public Clue Board and read it aloud.

After a clue-giver gives a public clue, the opposing team (except their clue-giver) tries to figure out the Keyword. They may discuss their ideas among themselves or write notes on their Chat Boards to avoid verbalizing their thoughts and sharing secret information with the other team.

While they are trying to come up with their guess, both clue-givers must not react to the discussion in any way as to influence their decision.

Only one guess per public clue can be made by the entire team. Keep in mind the Keyword might not be a single word.

When a team correctly guesses the Keyword, the round ends immediately and that team earns 1 point. Add the point as a hash mark to the team's total score on the Public Clue Board and erase all clues for that round.

Combining the clues of "SPORT" and "FOUL", Team Blue guesses "PENALTY", which is incorrect.

Play continues with Team Blue's clue-giver writing a new public clue, and Team Black getting the next opportunity to guess.


Important: A team may choose to pass and forfeit their guess. It may be in your team's best interest to pass until you have more information because you risk giving a hint to the opposing team.

However, if you pass, you risk the other team guessing the Keyword correctly first.

Note: These Clue Rules are not exhaustive. If a private or public clue violates the spirit of the game, then it is invalid ("depend" when the Keyword is "Deep End").

Be mindful of the public clues you give. The opposing team will have an opportunity to guess before your team, so may want to be subtle and lead your teammates to the Keyword from an unexpected direction.

Tip: When deciding on your private clue, you might consider a clue that will give your teammates context for future public clues you give them.

Note: We recommend playing the first couple of rounds without the Hint Board if you are new to CrossTalk. Feel free to add it in once you feel comfortable with the flow of the game.

The Hint Board can be a powerful tool in the hands of a skillful and clever clue-giver. It gives the clue-giver the ability to secretly convey ideas - such as opposite, ignore, emphasis, or combine - with relation to public and private clues and guesses.

The clue-giver may only draw the symbols above on the Hint Board to communicate with their team (see Gameplay Example on Page 6).

Note: A combination of symbols may be drawn on the Hint Board.


The clue-giver may only give their teammates the Hint Board immediately AFTER their team has made a guess or passed. The Hint Board can only be used ONCE during the round and cannot be changed once given.

Hint Boards are passed face-down and are for your team's eyes only.

Team members should take turns being the clue-giver throughout the game. We recommend both teams rotate their clue-giver after each round.

Draw a new card and continue playing until one team has earned 5 points and therefore wins the game.