Croak is a game in which your goal is to take control of a pond that is revealed piece by piece as you move your frogs.

Learn to make the best use of its resources: males to make babies and expand your colony, mosquitoes and water lilies to deploy more quickly, and reeds to take a rest. However, beware as pikes and enemy frogs will not spare you!

In order to win a game of Croak you must be the last player with a Queen in play.

Shuffle the tiles, then lay them face down to form an 8x8 square.

Each player chooses a color and collects the "Queen", "Servant" and "Male" pieces of the corresponding color.

Then the players place their Queen and 2 Servants, depending on the number of players as indicated on the illustration below. Whoever jumps the farthest starts.

Note: The Word Frog Is Used To Mean Both A Queen And A Servant Alike.

On your turn, you must move one of your frogs onto any adjacent tile. If the tile on which your frog lands is still face down, turn it over and apply its "effect".

When you are done playing your turn, it is the player on your left's turn to play.

Effects of the Tiles

Your frog must bounce off and move to an adjacent tile of your choice. You then apply its effect. You may not return to the tile that you've just left, unless all other adjacent tiles are already occupied by your own frogs. You may never stay on a Water Lily.

When one of your frogs lands on a Mosquito, you may move any of your other frogs. Then apply any effect for the tile on which your new frog lands. If you decide not to move another frog, your turn ends.

You are not allowed to move this frog on your next turn. Flip your frog on its back. At the end of your next turn, flip it back on its feet. Your turn ends.

Nothing happens. Your turn ends.

When your Queen lands on a Male tile whose Male piece you still own, she makes a baby provided you still have at least one remaining Servant in your reserve.

Set a Servant of your color on the same tile and discard the corresponding Male piece. You may not couple your Queen with that Male or its twin again.

Note: There are six different males, each represented twice in the game.

On your next turn, you must move your new Servant or your Queen.

If your Queen has already made a baby with that Male or its double, or if a simple Servant lands on this tile, nothing happens. Your turn ends.

Up to two servants (even belonging to different players) or a single queen can be on a given log at any time.

Note: Your Queen Is So Big That You Can't Move Your Queen On A Log If You Already Have One Of Your Servant On It.

This new version of the game presents you with three different backs for three sets of tiles. They are designed to help you make decisions and balance the risks.

One back represents the shallow waters of the pond. You are safe from the pike as there is none there. On the other hand, this is where all the Mud is, and there are more Reeds.

The other two represent the deep waters of the pond where the Pikes lay. There are also more Water lilies and there is no Mud. This path is faster but more risky.

Each deep water set holds the same number and type of tiles. For information, we indicated for each type of tile how many there are in each of the three sets, starting with shallow waters.

The winner is the last player with a Queen in play.

This option is for more experienced players. When a frog leaves a face-up tile, turn the tile face down provided there are no more frogs on it. Make sure you remember the effect of the tiles that have been turned back face down! 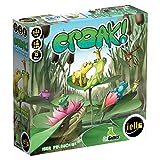