In Coyote, the players play the role of Indians. Each player wears a bandana around his head with one "feather". The goal is to guess the value of all the feathers without knowing your own!

If you can guess the correct value, you win! But usually, you'll win by bluffing. Whoever guesses wrong will be a true coyote!

Before your first game, carefully remove all 20 coins. Take the 12 coins with a picture of a coyote and attach one of the Velcro buttons to the back of each.

Be careful! Only the coins with a picture of the coyote will have a Velcro button on the back!

Place the 12 coyote coins in easy reach of all players. The other 8 coins are used only if you are playing the "Advanced Rules". If you are not using these rules, put those coins back in the box.

Each player wraps a bandana around his head in such a way that the Velcro strip is in the center of his forehead and shows on the outside of the bandana.

Finally, shuffle all 30 feathers and stack them face down in a pile in the middle of the table.

The youngest player goes first in the first game round.

Coyote is played over a number of rounds.

At the beginning of a round, each player takes one feather from the pile and sticks it in his bandana without looking at it.

The feather must be placed so that the printed value is visible to all the other players. Each bandana has a small hole in the front that a player can stick the tip of his feather in.

Important! A player can never look at his own feather!

The first player looks at the value of his opponents' feathers. Then he declares what he thinks the total value of all the feathers is (including his own). Since he doesn't know the value of his own feather, he will have to guess what it's value is.

The player can declare any number he chooses, but it is not wise to declare a number that is higher than what he believes the total value of the feathers might be. Of course, he can try to bluff and deceive his opponents!

The player on his left (clockwise) now has two choices:

If he chooses the first option, his turn is over and the player to his left must now choose to declare a higher total or call "Coyote". Players continue taking turns until someone yells "Coyote!

Watch out for the special feathers with the blue background!

These feathers are described below, and can modify the total value in unexpected ways!

If the final total value of the feathers is equal to or higher than the last number declared, the player who shouted "Coyote" loses the round! He must take one coyote coin and attach it to his own bandana.

If the final total value of the feathers was less than the last number declared, the player who made that guess loses the round and must take one coyote coin.

If a player collects three coyote coins, he is out of the game!

Example: Running Bear starts the round with a guess of 8.

Dancing Deer thinks that is too low, so she guesses 13. Lonely Turtle guesses 14, and Windy Night says 16.

Noisy Bird doesn't think the feathers are worth that much, so he calls "Coyote!"

All players now place their feathers on the table and add up the values. The total is 14! Windy Night's guess was too high, so she must take a coyote coin and attach it to her bandana.

If the total had been 16 or higher, then Noisy Bird would have had to take the coin instead.

After the round is over, place all the feathers used in that round face up in a discard pile. If a blue feather with the number zero on it was played in the round, then all 30 feathers are reshuffled and a new draw pile is created.

The feathers are also reshuffled if there are not enough feathers left in the draw pile to give one to each player.

Each player that is still in the game takes a new feather from the face-down pile and sticks it in his bandana. A new round begins. The first player in the new round will eighter be the player who called "Coyote", or the last player to guess a value - whichever one did not take the coyote coin.

Remember that the players cannot look at their own feathers!

Feathers with a blue background show a special action that must be taken when a player calls "Coyote" and the feathers are revealed. If more than one blue feather is revealed in the same round, resolve them in the order below:


End Of The Gane

When a player has two coyote coins on his bandana, he is in danger of being knocked out of the game. If he takes a third coin, he is out of the game and the other players continue to play without him!

The last player that remains in the game is the winner, and becomes the new Tribal Chief!

Note: in a small game with only 3 or 4 players, you may decide before the game begins to remove players from the game only when they collect their 4th or 5th coyote coin

Once you are familiar with Coyote, you can try playing this advanced variant:

At the start of the game, place the 8 coins with pictures face up in the middle of the table.

The basic rules of the game don't change. On his turn, before making a declaration or calling "Coyote", a player may choose to turn over one of the 8 coins to take a special action.

Each coin can be used only once per round. At the beginning of each new round, the coins are all turned face up again, and can be used.

Important: when there are only two players left in the game, they cannot use the picture coins any longer!

If you own two copies of Coyote, you can combine them to make an even bigger game! If you do, we suggest that you should still use only one set of feathers. 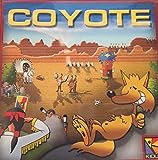