Hey, this is Grandpa Beck and I'm so excited to teach you how to play one of my favorite games, Cover Your Assets.

In just a few minutes I'll give you the ins & outs of the game. Soon you'll be up and runnin' and ready for some fun.

This usually happens in three to five rounds. If time is short, you can also just play one hand for some quick fun.

Each player builds their own stack of assets by placing matching sets of cards crisscross (perpendicular), one on top of another (see illustration). This is how the tabletop will look in a four-player game:

While making your own sets of assets is ok, it's way more fun to snatch them from your neighbors. Identical asset cards and wild cards will help you do just that. We'll get into the particulars of how to seize other players' cards later on.

You may be feeling pretty smug thinking about swiping everyone else's valuable asset cards, but remember-they can try to steal from you too!

Now that you understand the objective, let's jump into how to get started.

Note: At times there might not be any cards in the discard pile. Don't flip a card over from the deck to replenish it, just leave the pile empty until the next player discards a card.

Each turn you must do one of the following four actions:

Now for the fun part! Before you get too excited, there are a couple of requirements that need to be met before you can attempt to steal another player's assets.

Got it? Good. Here's how challenging and defending works:

At the end of each turn, all players must draw enough cards to bring their hand back to number they started with. The player whose turn it was draws first.

Once the draw pile is exhausted, gameplay continues in the same manner but without the opportunity to replenish your hand. To be clear, if you can't make a pair or steal, you must still discard one card for your turn.

Also, if you run out of cards in your hand, the assets in your stack are still vulnerable to be stolen! The final few cards you play can drastically swing the balance of fortunes among players, so play those last cards wisely!

After the last card has been played, each player adds total face value of their cards. These values are kept in a running tally round for round until a player reaches $1,000,000 in assets and becomes the winner.

If more than one player reaches a million in the same hand, the player with the highest score wins.

In the result of a perfect tie, the winner can be determined by a thumb wrestling match, a staring contest, or a tug of war. Alternatively, you can just play an additional round of Cover Your Assets. 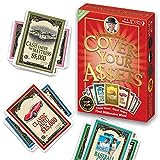