A sci-fi party game where players debate ridiculous issues plaguing the universe to win votes and become President of the Galaxy.

In Cosmocracy players argue over randomized sci-fi themed topics by making up facts and pandering to the other alien races to win votes and become the next President of the Galaxy.

There is no wrong way to debate because anything you say in this game is automatically true. If a player states that the galaxy is at war with evil space oysters, then that is the case for the rest of the game.

As the debates go on, the players establish the galaxy and how it works, creating a unique experience every time you play.

After each debate the voters use their race cards to vote for the "Pro" or "Con" candidate. Voters may choose the candidate who best appealed to their race's needs or whoever had the funniest or most creative response.

At the end the game, the player that received the most votes is elected President of the Galaxy. 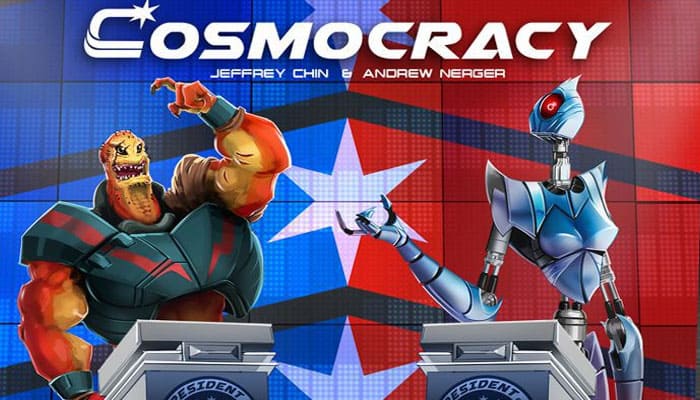 Cosmocracy is a party game where players argue over controversial issues plaguing the universe by making up facts and pandering to the alien races to win the most votes and become President of the Galaxy.

Place the Issue and Matter deck face-down. Put the 40 vote tokens in a pile. Have a stopwatch or smartphone nearby.

Each player chooses one of the alien races and takes the Race card (with the check icon). The players' corresponding Candidate cards (with the star icon) are then gathered and shuffled together into a face-down pile. Unused Race and Candidate cards are returned to the box. â€¦