A game of Corinth will let you live a few weeks in a harbor in the Ancient World.

Play the role of merchants delivering goods and goats and become the most well known among your peers...

By the end of the game (18 turns for 2 or 3-player games, 16 turns for 4-player games) it will be clear to everyone who will be immortalized as the best trader in Corinth! Make sure it's you!

Put the Harbor Board 1 in the middle of the table and give each player a sheet and a pencil 2. Select a first player in any way of your 3 choosing and give him the 9 white dice 3.

Leave the yellow dice on the side for now 4. Each player sta2ts the game with 1 Gold Coin and 1 Goat (circled symbols on the sheets).

In a 4-player game, each player crosses out the 2 leftmost spots on the Turn Track.

The first player crosses out the leftmost available spot on their Turn Track.

They can now purchase up to 3 yellow dice if they want. Each die costs 1 Gold Coin (to spend a Coin, simply cross one of the surrounded symbols out). They also take the 9 white dice and roll them all.

The first player then sorts the dice by value. All dice that show the highest value are put on the Gold District of the Harbor. Place the other dice one group per District on the Harbor, starting with the lowest ones on the Goat District then going up the scale.


Note: Yellow dice only benefit the first player of each round. There is another way to get some thanks to the Steward (see below).


Note: In the unlikely event that all the dice roll to the exact same value, congratulations! You just won the current game and every one after it...Snap a picture, post it on social media, frame it in your game-room and give this game to a friend.

Note: Rules for2-player games are slightly different. Check the differences at the end of this document.

The first player chooses a group of dice, removes them from the harbor board then takes the corresponding action. After that, they can build one or more buildings if they wish.

Once they have played their turn, if there are still yellow dice on the board, they are removed.

Each player in clockwise order then takes their turn by doing the same thing.

Note: If a player cannot take any action with the dice at their disposal, they still have to choose a group and remove it from the board.

If a dice roll leads to less groups than there are players in the game, the leftover players get to take a "move the Steward one step" action in compensation (see below).

Once all players have taken their turn, all remaining dice are removed from the Harbor. If all spots from all players' Turn Tracks are checked, the game comes to an end and you may then proceed to the scoring.

Otherwise, the player seated at the first player's left takes the white dice and becomes the new first player. They proceed to the next Harbor purveyance Phase.

Get Gold or Goats

When a player selects a dice group on the Gold or Goats District, they get as many coins or animals as the number of dice that were in that group (circling that many symbols on their sheet).

When a player selects a dice group in one of the 4 other districts, they can deliver Goods to shops in that District. They check as many symbols on their sheet as the number of dice that were in the District.

To help keep track of finished shops (shops where all symbols have been delivered), they can also circle the spot on top of the shop when they have checked all the symbols.

The first player who checks all the symbols in a District (except for the orange one) also circles the bonus spot on the top left corner of the District. They will score extra points at the end of the game.

Every other player crosses that spot out. They can still deliver goods to this district, but they won't get the bonus, even if they check all the symbols.

As an action, it is possible to move the Steward in the market instead of the regular action of the district where the dice group was taken.

In this case, the player must move the Steward by as many steps as the value of the dice in the chosen group.

It is possible to spend Gold Coins to modulate the Steward movement: each Gold Coin spent allows you to increase or decrease the number of steps by one. One of the buildings does the same thing (see below).

In order to move the Steward in the market, trace a path by drawing a line one step at a time, then circle the final symbol and benefit from the effect of that symbol (see below).

The first Steward move starts from the central spot of the market (where the Steward is shown). The following moves proceed from the spot where the previous one ended. Players may not move through or end on a spot that has already been crossed or circled.

Note: If a player ends up in a situation where it is not possible to proceed to a complete move with the Steward (not enough Gold Coins to decrease the number of steps for instance), they cannot choose that action.

The effect of the Steward depends on the circled symbol:

In the matching district, cross off as many goods as depicted in the selected Market space.

Get as many Goats or Gold Coins as depicted.

Add a yellow die to all following dice rolls by that player (never more than 3 yellow dice though).

The first time you reach one of these spots, record your points in the adjacent text diamond: 1 point for each circled symbol in the market, plus 1 point per circled "+1" spot.

For the second or third spot, add the score of the previous text diamond to the points earned by the move between the previous spot and the current one.

At the end of their turn, after taking their action, a player can construct one or more buildings.

To construct a building, spend the number of GoId Coins and/or Goats shown on top of that building on the sheet by crossing out that many circled symbols. Check the box corresponding to that building and you can benefit from its power going forward.

Temple - During the final scoring, each constructed building (including this one) is worth 3 points.

Warehouse - Each time you take the "deliver goods" action, check one more symbol in that district.

Stable - Each time you move the Steward, you can increase or decrease the number of steps by 1 or 2 for free (this can be combined with the spending of Gold Coins).

Store - Each time you take the "get gold" action, take 2 more coins.

Once all players have taken their turn in the final round (all spots are checked on all players' Turn Tracks), the game is over and each player proceeds to scoring.

The player who scores the most points wins the game.

In case of a tie, the player with more remaining gold coins wins. If still tied, players share victory.

In a 2-player game, a round takes place as follows:

Play then goes to the following round, with the second player as the new first player. 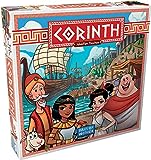