There are three games you can play with this COINHOLE set. In every game, you will be bouncing coins and trying to get them into the hole. Coins must first bounce off the surface in front of the board.

Bounce the coin lightly on the table about two inches from the front of the board. Bounce the flat side, not the edge for more accuracy.

Be the first team where every team member bounces a coin into the hole.


Note: Coins do not have to fall through both holes. A coin that makes it through the top hole counts!

Play continues until one team misses. The other team wins!

Be the team with the most hole sinks or coins on the board. The first team to 21 points wins.

The game is played in rounds with one side bouncing coins while the other side watches.

Both teammates of the players who have just gone collect their team's two coins.

Play continues as above with the opposite teammates now bouncing the coins. Points are tallied after each round.

To play this game with two players, simply use one board and stand next to each other. The first player to 21 wins.

Win everyone's coin at the table by bouncing coins into the hole and being the last player standing.

The four players should be spread around the table. Each player begins with one coin. Two players on opposite sides of the table are chosen

Play continues until only one person remains and the last player remaining wins the game! 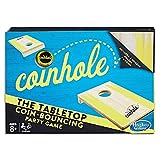 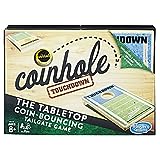