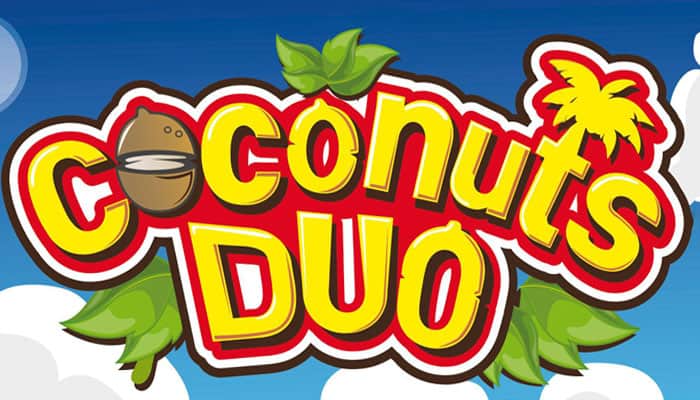 Each player takes a launcher, a player board, 2 special magic cards (shuffle the magic cards and deal 2 to each player) and distribute the coconuts roughly equally to the two players.

Place the 9 cups and 2 player boards according to the following pictures.

The younger player may begin by shooting one coconut with his launcher.

The player has to place or hold the launcher at a space behind the red line on his player board. If he manages to shoot a coconut into a cup (and it doesn't bounce out again), he takes the cup and places it on a free spot on his player board. After the lowest 3 spaces are full, additional cups are used to continue building the next levels of the pyramid (see picture).

Note: You are not limited to the neutral cups in the middle area. If you manage to hit a cup on the other player's board you may take it like any other cup.

If a player takes a red cup, he may take the red cup and shoot one more time. Coconuts are never removed from cups until the end of the game.

After this, it is the next player's turn. Play continues like this until the end of the game.

If a player runs out of coconuts, he may reuse any coconut that has not landed inside a cup. Before shooting the coconut, a player has to wait and see if the other player wants to use one of his special magic cards.

If any player manages to build a full pyramid of 6 cups (see picture), OR if all coconuts are inside the cups, the game ends.

If a player has built a full pyramid, that player wins the game.

If the game ends because all coconuts have been used, the player who has the most coconuts in the cups on his player board wins.

If there is a draw in coconuts, the player who played last wins.

You can use this card when someone makes a successful shot and is about to take a cup. This turn will be invalid and the player who succeeded has to shoot again, instead of taking the cup.

You can use this card on your turn. When you use this card, all cups will function as red cups for one turn. That means you can continue shooting as long as you keep landing your coconuts inside any cups.

You can use this card on your turn. Put this card on one of your own cups. This cup is guarded for one shot. Remove this card after it has been touched by a coconut.

You can use this card at the start of another player's tum. That player has to use his elbow instead of his fingers to make his shot.

Play when another player is about to shoot. This player has to make a blind shot. He may not shoot the coconut before closing his eyes.

Play when another player is about to shoot. You may try to divert the other player's shot by blowing. It is also allowed to use a fan or newspaper instead of blowing. But you can not touch or block the coconut with it.

If you have both Coconuts Duo and original Coconuts, you can combine them and play with 5 or 6 players. The Special Magic Cards from both versions can also be combined.

All other rules (8 Coconuts and 2 Cards per player, etc). remain the same as original Coconuts.