Be the first player to hand out all of your party invitations and make it back to the beach party!

The youngest player goes first, dropping the Die into the top of the Dog House Dice Slide. Whichever color the Die shows is the next color space you move to on the path.

If the Die shows two colors, you get to choose which of those two colors to move to next!


Moving along the board paths

Players take turns dropping the Die into the dog house (one drop per turn), with play moving to the left.

When you reach a friend whom you have not yet invited to the party, stop in their location and lay down their invitation in the corner square.

Once you have given an invitation to each of the friends, head back to the middle party area!

The first player to return to the beach party area after delivering all four invitations is the winner!

Clifford, The Big Red Dog - You are Invited Game 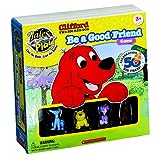 Clifford, Be a good friend