Cities: Skylines – The Board Game Scenarios

All of the introductory game rules apply. On top of them, however, there are other rules and game materials that come into play as well.

The scenarios are built on top of one another. All of the rules of scenario 1 also apply to scenario 2. And in scenario 3, the rules from scenarios 1 and 2 also apply, and so on.

That's why it's best to play the scenarios in the specified sequence. That way, you will gradually get to know all the rules. At the beginning of each scenario, you will set up the depicted game board pieces. Unlike in the introductory game, you will always begin with a starting capital of ten money tokens.

If you want to play the game with all of the rules right away, start by reading the rules for scenarios 1-4 and then play scenario 4.

Note: That way, you can hold onto a building until a better time later on even if you don't yet have the room for it - without having the card block your display.

Note: You can immediately read your selected role card out loud, in order to allow all the players to coordinate their selections better.


Note: If you are playing with role cards for the first time, you can try distributing cards at random instead of choosing specific ones.

Note: It is helpful to place the news card in the play area indicated on the card, such as near the utilities board or next to the supply of corresponding tiles. The news has immediate effect.

There are two ways to get rid of a news card: 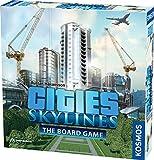