Place the box bottom (which includes the board) in the center of the playing area. Each player should choose one of the four corner "cups".

Position the board so that your cup is in front of you.

Note: In a two-player game, choose cups next to each other.

Place three "ice" cubes in each of the eight rectangle trays. O Place the four blueberry tokens in the middle of the board, each on a circle outline. Place the color die within easy reach.

The player who last ate an ice cube goes first, and play passes to the left.

On your turn, roll the color die and then take one of the corresponding actions:

If the die lands on a color side, pick up all of the ice cubes from one of the two trays that match the color you rolled and choose a direction - clockwise or counter-clockwise (see example).

Then, starting with the nearest tray (or cup) in your chosen direction, drop one cube at a time into each of the adjacent trays and your cup (skip your opponents' cups) until all of the ice cubes have been distributed.

Note: If a tray is full, place the cube in the next open tray.

This functions just like rolling a color, except you may choose any tray. However, you may not take a blueberry if you roll a wild. (see Blueberry Bonus for more).

Steal one ice cube from any opponent's cup and place it in your cup. (You may not steal a blueberry).

Example: Lauren rolls a blue. She chooses to pick up all three ice cubes from the blue tray closest to her cup.

She can place them in either direction but chooses to move them to the right, dropping one in her cup and the other two in the orange and pink trays. This ends her turn.

At the end of every ice cube tray sits a tasty blueberry waiting to be added to your cup! (Note that each blueberry corresponds with two different color trays).

If you roll a color that matches a tray but there are no ice cubes in it, you can take the blueberry and move it directly to your cup. Blueberries are worth 2 points at the end of the game. Note: Blueberries may not be collected if you roll a wild. They also can't be stolen.

Example: Jonathan rolls an orange. He sees that there are no ice cubes in one of the orange trays, so he takes the blueberry that's above and moves it directly to his cup.

If you roll a color (or wild) and there is only one matching tray that contains ice cubes (and no corresponding blueberries), you may immediately take ALL of the cubes in that tray and place them directly in your cup.

Note: If there are no ice cubes or blueberries in either matching tray , your turn simply ends.

Therefore she takes all 3 ice cubes from the other yellow tray and moves them directly to her cup.

Keep taking turns rolling the die and collecting ice cubes (and blueberries) until all have been taken from board. Then count up the number of ice cubes and blueberries you've collected.

Score 1 point per ice cube and 2 points per blueberry. Whoever has the highest total wins. In case of a tie, whoever collected more ice cubes wins. 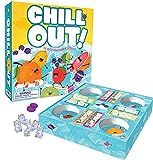