Play the flavor of Cheesonomics that suits your taste! The sharper the flavor, the older the cheese and recommended age (or sharpness) of players. For your first time, consider using the mild rules, then sample sharper rules as you master the principles of Cheesonomics:

The Big Cheese draws 15 market wedges and places them as drawn into 3 market wheels of 5 wedges each. Leftover market wedges are removed from the game.

The active player begins his turn by removing his cheese knife he may have placed on the serving tray previously and then by choosing one of 3 culinary actions to complete on his turn:

1. Sell Cheese (up to 3 wedges) of one color or animal type from your previously formed cheese wheel at current market prices and collect the appropriate curd cash.

The current market price for sold wedges is the sum of each face-up, matching color market wedge. Market wedges with a blue +1 ribbon count as 2 market wedges each (the "blue" color of the ribbon is inconsequential).

2. "Moove" the Market after selling cheese.

Example Color: If you sell 1, 2 or 3 reds you must flip 1 red market wedge to its opposite side.

Example Type: If you sell 1, 2 or 3 cows you obviously cannot flip 1 cow in the market as there are only colors. Instead, choose one of the colors matching one of the sold cows to flip.

Once the cheese wedge draw pile is exhausted during or after a player's turn, opponents may have the opportunity to take one final Sell Cheese action (but this time without "mooving" the market).

The player with the most curd cash after end game liquidation and bonuses wins Cheesonomics!


Any player(s) with the most sold cows, sheep, goats, yaks or reindeer of any color receives a bonus in curd cash equal to the number of wedges sold of that type.

The player who sold the most different colors of cheese breaks ties. If still tied, share the victory.


All of the mild rules of Cheesonomics apply, but with a few added flavors!

Market symbols are found below the animals on half of the cheese wedges (before removal). 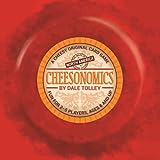