Each player begins the game with 12 discs and places them on the 12 dark squares closest to him or her.

Black opens the game, then players alternate their turns.

A piece making a non-capturing move may move only one square.

To capture a piece of your opponent, your piece leaps over one of the opponent's pieces and lands in a straight diagonal line on the other side. This landing square must be empty.

When a piece is captured, it is removed from the board.

Only one piece may be captured in a single jump, but multiple jumps are allowed on a single turn.

If a player is able to make the capture, then the jump must be made.

If more than one capture is available, then the player decides if he prefers this or not.

Single pieces may shift direction diagonally during a multiple capture turn, but must always jump forward (toward the opponent).


Upgrade a piece to a King

When a piece reaches the furthest row, it is crowned and becomes a king.

One of the pieces which had been captured is placed on top of the king so that it is twice as high as a single piece.

Kings are limited to moving diagonally but can move both forward and backward.

Kings may combine jumps in several directions (forward and backward) on the same turn.

A player wins the game when the opponent cannot make a move. 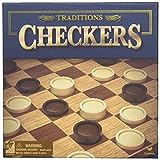 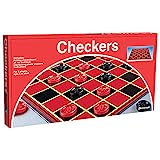