This get-up-and-dance game is full of Chihuahuas who know how to boogie. Be the player to get the most Chihuahuas on your dance floor and you win!


Important: You must always place Chihuahuas on your dance floor so that:

The player who most recently pet a dog goes first. On your turn, flip the top card face up to start or add to the discard pile. Take the action indicated by the card. After completing your action, play moves to the next player in a clockwise direction.

Keep taking turns and drawing cards until the dog pile is out of Chihuahuas. At that point all players count the Chihuahuas on their dance floors.

Whoever has with the most doggie dancers wins. In case of a tie, both/all players win! 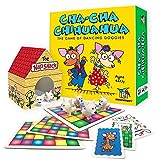