Several years ago, the Lower House of Japanese Parliament was very alarmed by incursion of use of metal eating utensils in Japan. Increased use of fork and knife among youth result in decrease in skill in using chopsticks!

Whoever obtains most pieces wins! Maybe you can best all opponents, win Final Victory Stage, and become Chopstick Grandmaster too!

The game is a simple but frantic dexterity game in which the object is to collect the most tokens by using chopsticks to pick up the object shown on the token.

In the two-player game, the players must grab only the exact piece shown on the token. After each round, the token is awarded and the objects returned to the bowl to start the next round. Play continues until a certain number of tokens are won. CDMC 3000 is a dexterity game in which each round a contestant reveals a Disk and announces what it is, every contestants using only their chopsticks (and a little skill) grab the wooden Shape(s) from the Bowl and returns it to his Dish before the other contestants wins that Disk.

The first contestant to win the target number of Disk wins the game. â€¦ 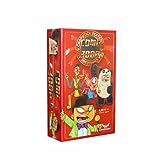