Get the three correct ingredients into the Cauldron before all six of the paths are blocked.

The evil Wizard has cast a spell to destroy the kingdom! You have the power to create a potion to break the spell, but you must work together.

Your quest is to find the three correct ingredients hidden under the potion bottles and move them up the paths and into the Cauldron before the Wizard blocks all of the paths.

If you do not get all three potion bottles with the correct ingredients to the Cauldron before the paths are blocked, the Wizard triumphs and the kingdom is destroyed.

1 Set out the board where everyone can reach it.

spaces on the board.

4 Mix up the Path Blockers and place them face down near the board.

5 Place the Wizard Hat on the arrow on the purple path on the board. This is the Wizard's Ring. The Wizard moves only on this ring and only in a clockwise direction.

6 Place the 2 Action Dice, 3 Magic Dice, and the Spell Breaker Token s. near the board where all players can )1 reach them.

You will begin each turn by rolling the white Action Dice. These dice will tell you what to do on your turn.

Remember: Cauldron Quest" is a cooperative game - work as a team and help each other determine the best move on each turn.

There are 4 possible Action Dice outcomes:

Move any Potion Bottle the number of spaces shown on the die.

Move the Wizard clockwise on the Wizard's Ring the number of spaces shown on the die.

space on the board.

Oh no, the Wizard has blocked a path! Turn one of ' the Path Blockers face up and place it on the matching path space on the board. That path is now blocked. A

Use this token at ANY point in the game to remove one Path Blocker from the board. Removing the Path Blocker opens the blocked path.

The Spell Breaker Token can be used only ONCE during the game.

Turn it face down after it has been used. The Path Blocker that was removed from the board is then turned face down and put next to the board with any other remaining Path Blockers. It is now back in play.

The Spell Breaker Token must be used before all six of the Path Blockers are on the board.

Work your magic! Roll the three black Magic Dice to try to release a magic charm.

Magic charms help you reveal ingredients, swap Potion Bottles, or move past Path Blockers and the Wizard. If you are successful, use the charm. If you are not, it is the next player's turn.

Roll any number of the 3 dice up to 3 times to try to use a charm. Always declare which charm you want to try for before you roll the dice.

You must first roll 3 even numbers to release this charm's power to reveal the ingredient. Leave the Potion Bottle ingredient side up for the remainder of the game.

Tip: Reveal ingredients early in the game so you know which Potion Bottles you need to move.

Roll 3 odd numbers to swap any two Potion Bottles anywhere on the board. For instance, swap a Potion Bottle that is on a blocked path with one that is not.

Tip: You might want to wait until you have revealed a few ingredients before swapping.

The Super Power Charm allows you to move a Potion Bottle past the Wizard on the Wizard's Ring or past a Path Blocker on a path.

If the numbers on the 3 dice add up to 12, you can move any Potion Bottle up to 6 spaces. You may move into the Cauldron if the ingredient is revealed.

You declare that you want to try for the Reveal Charm. You can roll a total of three times to get all even numbers.

For example, on your first roll, you roll 2 Even numbers and 1 Odd.

You have two rolls to get another Even number on the third die.

If you roll an Even number and all 3 dice have Even numbers, you have successfully rolled the Reveal Charm and you can turn over any Potion Bottle to reveal an ingredient.

Get the three Potion Bottles with the correct ingredients into the Cauldron before the Wizard blocks all of the paths and you all win!

If the Wizard blocks all six paths before the three Potion Bottles with the correct ingredients are in the Cauldron, the Wizard wins. 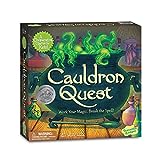