The Caribbean in the 18th century: 6 pirate ships lie in wait on the sea, ready to pillage the rich ports, or to rob the booty from other ships.

The sea is divided into spaces. Each player is in possession of three safe havens, marked in his color on the board.

The pirate ships do not belong to any player. Thus, the players must bribe the pirates each time they want a pirate ship to act on their behalf. And what is the greatest temptation for a Caribbean pirate? Rum of course, barrels full of rum!

The aim of each player is to lure the pirates to deliver treasure chests to one of his own safe havens, and not to those of his opponents.

In every round, the player who has offered the most rum to a ship gets to move that ship as many spaces as the number of barrels shown on the bribing chip.

The aim is to have the most doubloons at the end of the game.

Each player takes a cardholder and a set of 7 bribing cards in his color. He places the cardholder so he can see the ship's names.

Place the remaining 10 treasure chests face down in piles of two each on the five special spaces in the upper right corner of the board.

Place the coins next to the board. They have the following values:

symbols. These symbols are of no further importance during the game.

The pirate ships do not belong to any player. Thus, the players must bribe the pirates to act on their behalf according to their strategies.

For each capture of a harbor city and for each treasure chest brought to a player's safe haven, the player earns doubloons.

At the start of each round, each player allocates six of their seven bribing cards to the names of the six ships on their cardholders.

Each places he seventh card (intended as tie-breaker in case of a draw) face down next to the cardholder.


Move the Ships in Alphabetical Order

First, each player reveals his bidding card for Arriba by placing it face up in front of his cardholder so all can see it. The player who bid the most barrels, immediately moves the Arriba, moving it a number of sea spaces equal to the number of barrels in his bid.

However, each thief card played by an opponent subtracts one space from the ship's movement. The player need not use his full movement allowance when moving a ship.

Only one ship may occupy a sea space. Players must move ships around occupied sea spaces. Ships may move through all safe havens and ships may stop at safe havens.

After the Arriba has been moved, the players reveal their bids for the Bravo and the player with the highest bid moves it in the same way. Then come the Caribic, the Diabolo, the Evita, and, at last, the Fuego.

A face-up card means the player is bidding some more (note: zero is more than -1). The winner gets to move the ship, but only as far as the number of barrels on the original card allows, subtracting any thief cards from the original bids.

Once revealed, a tie-breaker card cannot be used a second time until the next round. If the result of the tie-breaker is another tie, the ship is not moved in this round and remains where it is. Tie-breaker cards revealed face down can be used to break another tie.

Each ship may only carry one chest at a time and the value of the chest must be visible on the deck of the ship.

The active player may take these actions in any order he chooses, whenever he chooses during the ship's movement, including before and after he moves the ship.

The active player can deliver a treasure chest to safety when :


In all cases, the owner of the safe-haven (normally, the active player, but it could be another player) earns the number of doubloons shown on the treasure chest (4,000 - 8,000 doubloons).

The active player then places the treasure chest face down on the city names on the chest to show its chest has been taken and will not be available again in the game.

Important: a player may never throw a treasure chest overboard! Doubloons earned by players are public and must be displayed in the players' play areas for all to see.

When all 6 ships have been moved, including any that failed to move because of an absolute tie, the round ends.

Each player takes his bidding cards back and a new round begins. The ships remain where they were at the end of the round.

The game ends when at least one player has:

The current round is played to completion. The player at the end of the round is the winner! 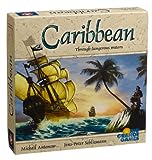